Download
Guest Info & Links: Dan Zigmond & Tara Cottrell
From the Show: To Your Good Health Radio
Summary: The real Buddha was thin... not the current vision we have of the big Buddha belly. How can his principles help you lose weight?
Duration: 19:06
Host: David Friedman, DC

She works for Stanford University’s Graduate School of Business in digital content, and consults for a fitness startup in Silicon Valley.

Contrell is a mom of three and continues to give her time in a variety to non-profits, including acting as a court appointed advocate for children in the foster system in San Mateo County.

Dan Zigmond has spent over 20 years living and working in Silicon Valley, working for both tiny startups and tech giants. He is currently Director of Analytics at Facebook, responsible for the data science behind the News Feed. Zigmond is also a board partner at Metamorphic Ventures, a venture capital company based in New York, and an advisor to many startups in Silicon Valley and beyond.

He is an ordained Zen Buddhist priest, teaching occasionally at Jikoji Zen Center in the Santa Cruz mountains, and has studied and practiced Buddhism in temples in America, Thailand, and Japan.

In 2015, he was named one of Wired magazine’s “20 Business Geniuses You Need to Know.” He has two teen daughters, and spends most of his non-work, non-meditating time driving them around. 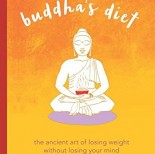 There’s a lot you probably don’t know about the Buddha.

For one, the real Buddha was thin... not the current vision we have of the big Buddha belly.

And, before he became the “Enlightened One,” he was a pampered prince named Siddhartha. He tried dieting once and didn’t like it any more than you do. Instead, he sought a “middle way” between unhealthy overindulgence and unrealistic abstinence. The instructions he gave his monks about eating, more than 2,500 years ago, were surprisingly simple.

Fast forward to today, and modern science confirms what Buddha knew all along.

It’s not what you eat that’s important, but when you eat. Instead of the modern world's "around the clock" eating, this approach focuses on an eating clock; essentially a window of time within which you eat. For example, a nine-hour window would allow you to eat between 9:00 a.m. and 6:00 p.m. The rest of the time you would fast.

You don’t need to follow the latest fads or give up your favorite foods. You just have to remember a few guidelines that Buddha provided... guidelines that, believe it or not, will help you lose weight, feel better, and stop obsessing about food.

Sure, Buddha lived before the age of doughnuts and French fries, but his wisdom and teachings endure, providing us with a sane, mindful approach to achieving optimum health.

Listen in as Dan Zigmond & Tara Cottrell, authors of Buddha's Diet: The Ancient Art of Losing Weight Without Losing Your Mind, join Dr. Friedman to explain what the Buddha Diet is and how it can help you lose weight and get healthy.
Tagged under

More from this show . . .
Prev
Next
Finding Intimacy with YogaEncore Episode: Want To Lose Weight? Get Rid of Emotional Baggage