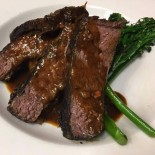 Sear all beef till golden brown in rondeau.

Add tomato paste and stir constantly until it browns on sides and bottom of pan, about 2 minutes.

Turn heat up to medium-high. Add wine and simmer, scraping up fond from sides and bottom. Simmer until reduced by half, 8-10 minutes.

Add veal stock, carrots, cheesecloth of herbs. Add beef and any juices in the bowl. Cover and bring to a simmer.

Transfer to oven and cook 2 to 2½ hours, turning meat twice with tongs during cooking. When done, a fork will slip easily in and out of meat.

Allow to cool when cooked. Remove short ribs and portion into resealable bags into a fish tub. Take the braising liquid and discard the cheese cloth herbs.

Puree the half the braising vegetable to thicken the sauce.
Tagged under