Dr. Steven Abrams is the inaugural Chair of the Department of Pediatrics, and a professor of Pediatrics, at the Dell Medical School at The University of Texas at Austin.

He is a neonatologist and came to the Dell Medical School from Texas Children’s Hospital in Houston. He was also a professor of pediatrics, director of the fellowship program in neonatal-perinatal medicine, and medical director of the Neonatal Nutrition Program at Baylor College of Medicine.

A graduate of The Massachusetts Institute of Technology, he studied medicine at The Ohio State University College of Medicine and was a pediatric resident at Akron Children’s Hospital. He also had fellowships at the National Institutes of Health in nutritional research and Baylor in neonatology and in nutrition.

His research is focused on the mineral requirements of children of all ages, particularly calcium, zinc and iron metabolism. Clinically, his interests are in the growth of preterm infants and the use of specialized nutritional practices, including omega-3 fatty acids in the care of infants who have problems with intestinal function. He believes that achieving adequate growth safely in high-risk infants is a key aspect of neonatal care, and a multi-disciplinary approach is vital to meeting this goal. 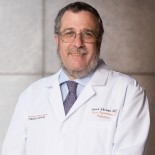 A new policy statement from the American Academy of Pediatrics (AAP) states that fruit juice provides no nutritional benefit for children under one year and should not be included in their diets.

Babies need mother’s milk or infant formula in the first year of life. Fruit juice doesn’t provide anything new. It can put the teeth at risk.

You may see that juices contain vitamins. These vitamins are often added to the juice to give some benefit.

It’s better to give your child whole foods of appropriate size in the second six months of life. Cut up fruits into manageable pieces. This develops good eating habits and provides your child with fiber.

More from this show . . .
Prev
Next
Encore Episode: Gun Safety, ASK Day & Coordinating a PlaydateSpeech Delay: What Parents Should Know