Sheila Cluff, internationally-known fitness expert and founder of The Oaks at Ojai health and fitness destination spa, is an inspiration because the 80-year-old mother of four and grandmother of seven embodies the lifestyle she teaches.

As told in her autobiography, Living Your Dream, Cluff is a wellness visionary who created cardiovascular dance in the 1950s, later known as “aerobics,” and pioneered the concept of the modern destination spa in the 1970s.

In the ’50s, long before the fitness industry came up with the term “aerobics,” she drew from her choreography as a professional ice skater to create “cardiovascular dance,” adding a spark of fun to exercise. In the ’70s when those seeking to lose weight on vacation had little choice but to trudge off to the grim “fat farm,” she conceived of a contemporary spa that combined luxurious European body treatments with exciting exercise and healthy delicious food. Thus was born The Oaks at Ojai, which would come to be declared the best destination spa in the United States by Spa Magazine.

Cluff was one tireless entrepreneur, at a time when moms were not commonly found in the professional world. She launched a second spa, The Palms in Palm Springs, hosted wellness TV programs on the NBC network and on KABC in Los Angeles, founded the Healthy Holidays travel company and conducted numerous speaking engagements. She also is one of the founding members of C200 (The Committee of 200), an organization of women entrepreneurs and high-level corporate executives, and was instrumental in creating the International Spa Association (ISPA), of which she was one of its first board members and was the recipient of the ISPA Visionary Award, demonstrating her astuteness and dedication to the industry.

She was named the first “Entrepreneur of the Year” recipient by IDEA, the world’s largest membership organization of health and fitness professionals. Additionally, SPA magazine recognized the graduate of Ottawa Teachers College as a pioneer of the American spa industry with a “Trailblazer” tribute. When she and her family resolved to transform a dilapidated Ojai gas station and its grounds into a civic treasure, the result was the beautiful Cluff Vista Park. Most recently, Cluff was one of the first inductees in the Spa Hall of Fame by the Washington Spa Alliance in Washington, D.C.

Cluff’s wellness philosophy flies in the face of most fad diet and fitness regimens. “I advise my spa guests to throw away their scales,” she writes. Instead, she recommends “get a tight pair of non-stretch jeans, and make sure they always fit. Measurements are more important than weight.” At her spas, she rejected the idea of subjecting guests to torturous deprivation. “I wanted neither a fat farm nor a beauty spa,” she writes, “but a place that focused on health and fitness, where people would come to enjoy themselves, not be ‘punished’ with exercise and diet food.

After a 45-year absence, she returned to figure skating as Mrs. Santa Claus in Holiday Magic on Ice and helped raise $6400 for Ventura County Foster Children, a role she reprises each year. Since 2006, Cluff has competed in the Ice Skating Institute Adult Championships and has won a total of 27 Golds in her adult career and has competed in Germany, Las Vegas, New York and Florida. Cluff was a contributing author for Recovery Magazine, a publication designed to help those in recovery from physical or emotional difficulties by extending support and encouragement.

As American Spa’s 2008 Professional’s Choice Awards called her the “Most Influential Spa Leader,” she keeps on making philanthropic efforts. She speaks regularly on behalf of Go Red for Women to educate women across the country about heart-disease and is the perfect role model for women across the country since she has spent decades transforming people’s lives by helping them make life-altering changes by adopting an easy-to-follow philosophy that combines healthy eating with an active lifestyle. 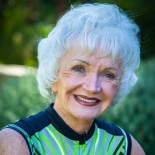 It takes work to be fit, but you can condition yourself to have a lifetime of fitness.

Snack on fitness by using little snippets of time to be active. For example, work on balance by lifting one foot and then the other as your coffee reheats.

Try spending 80 percent of your time nourishing your body and staying active. Then, you’ve earned 20 percent to do whatever you want... eat sugar, consume fats and have down time. Just be sure not to switch the percentages.

It’s important to be patient with yourself. Your physical recovery time and ability may change over time. Do what you can and enjoy the abilities you have now. When one door closes, another opens. You learn new skills, no matter what your age.

You can always be physically active, even if you aren’t engaged in the same level of athleticism as you did when you were younger.

Your balance will change as you age. Practice improving your balance by standing as you dress. Stand on one foot when waiting to cross the crosswalk.

Don’t take your health for granted. Accept the changes in your body. Constantly stay active in any way you can. This may be by gardening or taking your dog on walks. Find a sport you love and stick with it for life, even if your ability with that sport decreases as time passes.

Listen in as octogenarian figure skater and fitness enthusiast Sheila Cluff shares how you can have a lifetime of fitness.

More from this show . . .
Prev
Next
It’s Time to Treat Yourself with Body KindnessFacial Masks: What's Right for You?
FREE RadioMD Newsletter: