Megan Shea is the Co-Founder and CEO of The Soulfull Project, PBC a B Corp certified company whose mission is to make wholesome, nourishing food accessible to all and increase community engagement. For every serving of The Soulfull Project’s hot cereal purchased a serving is donated to a food bank in the same region.

The Soulfull Project launched as a small test in August 2016 in Philadelphia and New Jersey with three giving partners and has quickly expanded. In its first two years, The Soulfull Project has expanded nationally to 200 food bank partners, over 3,000 retail locations, and over 1.5 million servings going to food banks around the country.

The Soulfull Project was launched as a wholly owned subsidiary of the Campbell Soup Company. As the company scaled in 2018, Megan and her co-founder negotiated a successful spin out of Soulfull and it is now an independent privately-owned entity.

Megan has a Bachelor of Fine Arts from Carnegie Mellon University and an MBA from The University of Chicago Booth School of Business with a focus on Finance and Marketing. Megan lives in New Jersey with her husband and two children. 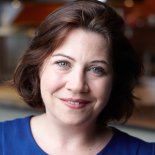 Wouldn’t it be nice to support those facing food insecurity with your own grocery purchases?

The Soulfull Project will donate one serving of food to a local food bank for every meal purchased. Food insecurity affects so many people that these purchases make a significant difference in the lives of the hungry.

More from this show . . .
Prev
Next
Dating While DyingPutting the Joy into Exercise
FREE RadioMD Newsletter: