EP 16 - Naomi Judd: My Descent Into Depression & How I Emerged Hopeful

Hailing from the Appalachian foothills of Ashland, KY, mother and daughter duo of Naomi Judd and Wynona Judd -- The Judds -- were first discovered by RCA label head Joe Galante in 1983 after landing a spot on WSM-TV’s The Ralph Emery Show.

They made their chart debut by the end of the year with “Had A Dream (For The Heart),” and the two were on their way to a history-making career. For the rest of the 1980s, each single from The Judds released by RCA went to the Billboard Top 10, with 14 hits going all the way to number one.

The Judds embarked on their “Farewell Tour” in 1991 after Naomi’s diagnosis of Hepatitis C forced her to retire from the road. Wynonna launched a successful solo career with her self-titled 5x multi-platinum debut album. Her first three singles also reached No.1 on the country charts and has become a country icon in her own right. 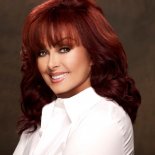 Naomi Judd's life as a country music superstar has been nonstop success.

Offstage, she has battled incredible adversity.

Struggling through a childhood of harsh family secrets, the death of a young sibling, and absent emotional support, Naomi found herself reluctantly married and an expectant mother at age 17. Four years later, she was a single mom of two, who survived being beaten and raped, and was abandoned without any financial support and nowhere to turn in Hollywood, CA.

Through this, Naomi has always been a survivor. She put herself through nursing school to support her young daughters, then took a courageous chance by moving to Nashville to pursue their fantastic dream of careers in country music. Her leap of faith paid off, and Naomi and her daughter Wynonna became The Judds, soon ranking with country music's biggest stars, selling more than 20 million records and winning six Grammys.

At the height of the singing duo's popularity, Naomi was given three years to live after being diagnosed with the previously incurable Hepatitis C. Miraculously, she overcame that too and was pronounced completely cured five years later.

But, Naomi was still to face her most desperate fight yet. After finishing a tour with Wynonna in 2011, she began a three-year battle with Severe Treatment Resistant Depression and anxiety. She suffered through frustrating and dangerous roller-coaster effects with antidepressants and other drugs, often terrifying therapies and, at her absolute lowest points, thoughts of suicide.

Against all odds, Naomi persevered once again.

All of these life events culminate and are captured in Naomi's new book, River of Time: My Descent into Depression and How I Emerged with Hope. She joins Dr. Bond to discuss the book and how she has fought for survival time and time again.
Tagged under

More from this show . . .
Prev
Next
EP 15 - How Healing from Lyme Disease Gave Me My PurposeEP 17 - Beautiful Money: A Holistic Approach to Increasing Self Worth & Net Worth