Sister-in-laws Sukey and Elizabeth Novogratz have been consumed in the world of wellness. Together formerly co-founding the celebrated newsletter, The Well Daily, the duo was inspired to discover the steps toward making meditation part of a mindful, reflective, and joyful life.  Together they traveled the world studying meditation everywhere from classrooms, to the Lakota sweat lodges, to ashrams and the Tibet House, learning from renowned teachers including Sharon Salzberg, Krishna Das, Ram Dass, Amma, and the monks at One World Academy in Chennai, India.  Everything they discovered helped inspire their new book, Just Sit: A Mediation Guidebook For People Who Know They Should But Don’t, a hands-on look at what meditation really is, what it does, and how to do it.

Committed to raising awareness and helping others, Sukey was the Executive Producer on the acclaimed documentary “The Hunting Ground,” an expose of rape crimes on U.S. college campuses, their institutional cover-ups, and the devastating toll they take on students and their families. She is also a philanthropist and a devoted supporter of the visual and performing arts, music education, international development, and research in neurological science. She has been a part of major foundations such as The Joyful Heart Foundation, The Acumen Fund, The Robin Hood Foundation, and School for Strings.  She graduated from Princeton University with a degree in Anthropology, and then went on to study Fashion Design at Parsons.

Sukey and her husband, Mike Novogratz of Fortress Investment Group LLC, and their four children, live in Manhattan and Amagansett.

Elizabeth Novogratz, who is Mike Novogratz’ sister, was previously an actress known for her role in “I Choose 2 Be Me”. Since then she has written two books with her other brother and sister-in-law, Robert and Cortney Novogratz, Home by Novogratz and Downtown Chic: Designing Your Dream Home. She currently lives in Brooklyn, NY. 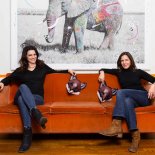 You know you should take a few minutes to sit still, but the demands and distractions of modern life make it difficult. Meditation can help you gain focus. You just have to figure out how to work it into your life.

Sukey and Elizabeth Novogratz say that if you’re breathing, you’re halfway to meditation. The other half is paying attention to your breath.

Misconceptions about meditation may keep you away. You don’t have to sit for hours, be perfectly still or clear out all of your thoughts. It’s okay to acknowledge your thoughts.

You may think you need to worry about things or that you can control the universe with your thoughts. Obsessive thinking creates stress. Meditation allows you to observe your thoughts and make decisions about them.

Detoxify your thoughts with these simple steps:

Listen as Sukey and Elizabeth join Dr. Bond to share how to meditate on a busy schedule so you can detoxify your thoughts.
Tagged under

More from this show . . .
Prev
Next
EP 37 - The Reset Plan: Find Health & Fitness SuccessEP 39 - How to Build a Wellness Routine that WORKS