EP 58 - Be in Control of Your Moods, So They Don't Control You

Sara-Chana Silverstein is the author of the book MOODTOPIA: Tame your moods, de-stress, and find balance using herbal remedies. She is a Master Herbalist RH (AHG), Classical Homeopath, Board-certified lactation consultant (IBCLC), businesswoman, wife, keynote speaker and mother of seven children. She is regularly featured on TV new shows across the US discussing how people can integrate alternative medicine with conventional medicine. She is a consultant to many pediatricians, surgeons, obstetricians, midwives, general doctors and guest lectures to resident at medical schools.

After working with over 20,000 clients for the past 20 years she saw that most people needed help with their moodiness and created a program that teaches people how to: “BE IN CONTROL OF YOUR MOODS, SO THEY DON’T CONTROL YOU!”

Sara-Chana grew up in Los Angeles, California, as a precocious child with an inquiring mind and very high energy. At age five she became an actress, appearing in national commercials, TV shows and film. Simultaneously she was a gymnast, competing at national and international levels. She was an AAU Junior Olympic champion. She seized the opportunity and was given a co-starring role in “Nadia,” a major motion picture about the Olympic champion, Romanian gymnast Nadia Comaneci.

Despite evidence to the contrary — her intense acting career and sports activities — her real childhood dream was to become a writer and to attend medical school. After she graduated from UC Irvine, she was invited through Yale School of Drama to spend a summer at Oxford University in England studying Shakespeare. True confession? Most of her time was spent in the Oxford library reading books about herbs and not Shakespeare. With apologies to Will.

She went back to the states and spent the next five years, attending homeopathic school and medicinal herbal training. Her much-in-demand clinic grew rapidly as her success and fame flourished, people began flocking from all over seeking treatment for their themselves and their children. 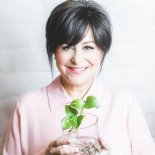 We already use herbs in cooking and teas, like parsley, mint and cilantro. Using herbal tinctures means you can get the benefits of herbs on the go.

Sara-Chana has herbal recommendations for those who need a bit of a boost.

Sara-Chana advises speaking with your doctor if you are seeking treatment for a chronic or moderate condition.

As a bonus tip, Sara-Chana recommends lowering cortisol through random acts of kindness. They help you control your mood and don’t cost a thing.

Listen as Sara-Chana joins Dr. Bond to share how to boost your mood with herbal tinctures.
Tagged under

More from this show . . .
Prev
Next
EP 57 - Cognitive Behavioral Therapy: Train Your Brain to Overcome ChallengesEP 59 - Canines on Cannabis