Liz Weiss is an award-winning broadcast journalist, speaker, blogger, and spokesperson. She is the co-author of three cookbooks, The Smoothie Bowl Coloring Cookbook: Healthy Recipes and Playful Mandala Food Designs for Kids and Adults (M3 Press, 2015), No Whine with Dinner: 150 Healthy, Kid-Tested Recipes from The Meal Makeover Moms (M3 Press, 2011), and The Moms' Guide to Meal Makeovers: Improving the Way Your Family Eats, One Meal at a Time (Broadway Books, 2004).

Liz champions good nutrition on her website, MealMakeoverMoms.com, where she shares healthy “makeover” recipes and practical mealtime advice for families. Liz also co-hosts the food and family radio podcast, Cooking with the Moms, and she’s the co-creator of Meal Makeovers, a mobile recipe App filled with kid-friendly recipes and cooking videos. She is a columnist for Live Well Digest, a WIC publication, and Relish magazine.

Liz is a sought-after cooking instructor, speaker, and consultant. She has extensive experience as a live television and radio guest. During her career, she has conducted hundreds of live and taped interviews, appearing on NBC’s Today Show, CNN Headline News, the Food Network, FOX News, ABC-Boston, and many more. 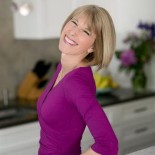 Winter squash (acorn, butternut, spaghetti) can be the basis for some truly delicious dishes.

But, because squash rinds can be quite tough, preparation can be a bit intimidating. In reality, prep is really quite simple.

Liz Weiss, author of The Moms' Guide to Meal Makeovers: Improving the Way Your Family Eats, One Meal at a Time!, joins host Lisa Davis to share two of her favorite spaghetti squash dishes, as well as how to prepare the squash for the base of the dishes.

Preparing Spaghetti Squash
Wash the squash, poke a few holes, and microwave for about two minutes (which softens it). Cut off stem, slice in half (length-wise), and scoop out seeds (which can be roasted like pumpkin seeds). Preheat oven to 400. Brush insides with olive oil, salt and pepper. Place upside down on tin foil on a baking sheet. Bake for 35-40 minutes. Once cooled, shred squash insides with a fork. It now becomes the canvas for so many different recipes.


Buy on Amazon
The Moms' Guide to Meal Makeovers: Improving the Way Your Family Eats, One Meal at a Time!
Tagged under

More from this show . . .
Prev
Next
How to Heal Your Pain NowIs Your Brain Making You Fat?