Download
Guest Info & Links: Markus Rohkranz & Cara Brotman
From the Show: Talk Healthy Today
Summary: Learn how a raw-food diet can help you feel better, both inside and out.
Duration: 21:58
Host: Lisa Davis

Markus Rohkranz
At age 55, Markus is younger than when he was 30. Twenty years ago, his health was so bad his heart was collapsing, he needed thick glasses and his lungs were so congested he could hardly breathe. Yet he never touched a drop of alcohol, smoked a cigarette or did any drugs in life.

So, why was he falling apart? He was also unhappy with his direction in life and his relationships. All this changed dramatically when he gave up everything, walked naked into the desert, not caring if he ever returned. When he returned 40 days later he was a new being—a person that started changing the world. He got dramatically younger. He never got sick again. His transformation was so astounding, he was even tested by Russian scientists. Success and freedom were handed to him on a silver platter. He made his own 2.5 million dollar motion picture and wrote numerous international bestsellers. He’s now sharing his secrets with the world. This could be you!

Cara Brotman
At age 49, Cara IS the embodiment of an ageless fantasy girl. Like Markus, she also learned how to never get sick again, stay young and thin, and be free to live her dreams.

She proudly raised a 24 year old son and is now looks better than ever, showing that middle age and menopause is a myth.

The love affair between Markus and Cara is legendary. It took half a century for these two to meet, but they knew if they prepared properly, their dreams would come true. And they did. Let Markus and Cara inspire you to hold out for your dreams—and show you how to prepare. 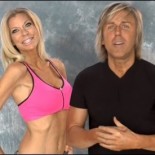 Markus Rothkranz never smoked a cigarette in his life, drank a drop of alcohol or did any drugs other than what the doctors prescribed for him.

Yet, by the time he was in his late 20s, his heart was collapsing, he needed thick eyeglasses, his lungs were filled with fluid and his digestive system was bleeding.

Little did he know it was all because of what he was eating: the standard modern diet (SAD).

Now, at age 55, Markus says he looks and feels younger than when he was 30.

Markus and Cara Brotman (who has also been eating a raw-food diet for over a decade), join host Lisa Davis to share information from their newest book, Love on a Plate: The Gourmet Uncookbook, as well as some raw-food tips and tricks.


Buy on Amazon
Love on a Plate: The Gourmet Uncookbook
Tagged under

More from this show . . .
Prev
Next
Yoga for DudesLook & Feel Better than Ever Before