His first photo book "See The Light: A Passage To Sierra Leone," documents the Light House Medical Mission's trip to raise awareness for fresh water in impoverished countries. Other professional photography assignments have included shooting more than 30 celebrities for Bootcampaign.org's patriotic image campaign, and editorial work for magazine's including People, Angeleno, Closer, Focus, Paper, Casual Living, The Wag, Animal Wellness, Groomer to Groomer and Life After 50, among others. As an actor, Steines has guest starred on television shows including "CSI: NY," "The Practice," "Medium," "Half & Half," "America's Next Top Model," "Handy Manny" and Sony Pictures' feature film "Nixon." 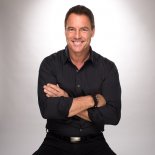 Emmy award-winning Mark Steines is known as one of the entertainment industry's most dynamic and well-respected television journalists. From small town Iowa to the red carpets of Hollywood, Steines a three-time Emmy winner, has established himself as one of the most trusted and charismatic figures in entertainment news.

Since landing in Hollywood, he has interviewed thousands of A-list actors, producers, musicians and athletes. But, what many of his fans may not know about Mark is he’s a born fitness enthusiast. Featured in in People Magazine's coveted "Sexiest Man Alive" issue, Steines also was profiled in Men's Fitness Magazine's "25 Fittest Men in America." He was a spokesperson for Beachbody's "10-Minute Trainer" program.

In this episode of Your Brain Health, Dr. Kristen Willeumier discusses fitness with Mark, and both inspire listeners to make fitness a part of their lifestyle.
Tagged under

More from this show . . .
Prev
Next
An Exploration Into Meditation with Bob Roth, Part 2How to Maximize Your Brain Health for the Long Term with Dr. John E. Lewis, Part 1