Veterans in Need: Not a Political Problem; a PEOPLE Problem

A day we honor the men and women who have served in the United States Armed Forces.

Unfortunately, this day has gotten a bit lost in our ever-growing self-serving society, where it simply means a vacation day from work or an extra 20 percent off at Macy's.

If you ask me, that's a tragedy.

So, yeah, I can appreciate what these individuals do... and it's why I have such a hard time understanding why our veterans aren't being taken care of in the way they should. I fail to comprehend how we bring them home from war and then -- more often than not, it seems -- leave them to their own devices to deal with what they've seen and what they've done.

The result is not acceptable.

In 2012, a report came out that said approximately 22 veterans commit suicide every day.

That was 2012. Imagine what it might be today, especially considering the study only looked at data from 21 U.S. states and lacked other potentially revealing information.

Suicide doesn't affect just service men and women who have been to war, either. You don't have to go to war to know war. There are individuals that serve in all sorts of capacities who may have lost a friend, or two, or five. Even the strongest person could get beaten down by all that death.

Not to mention those veterans who are struggling and just need a helping hand, but can't seem to get any of the benefits they were promised. I know people who have been denied help from the VA again and again, even though they desperately need it.

In my Los Angeles neighborhood, two hands isn't enough to count the number of homeless vets I see on a weekly basis.

And, there's a growing problem with our women who serve, as their needs for care may differ in ways from service men. Neither is more important; just different.

In short, we're failing our veterans. We can put on special appearances and tributes til the cows come home, fly flags tall and proud in our small towns, and have Navy Petty Officer Generald Wilson sing the National Anthem for the Monday Night Football game while releasing an eagle across the stadium... but it's not going to change the greater issue at hand.

This isn't a political statement; it's a people statement. I don't know the answer, but we have got to figure it out, and soon.

In the meantime, if you know a veteran and suspect he or she is having a hard time, YOU can do a lot to help just by being there.

No one should suffer alone.

Originally from Minnesota, Sylvia moved to California for the sun, sand and warm temperatures. She graduated from the University of Minnesota with a degree in English and Communications, both of which she has put to good use in her work with RadioMD as Senior Editor.

Her past work, including articles, editorials and blogs, has been published nationwide - online and in various print publications.

Sylvia truly believes in taking health seriously! From nutrition and physical fitness to alternative therapies, Sylvia credits her incredible wellness to living a healthy lifestyle. And, as one of the editors of RadioMD, she feels lucky to be able to learn something new about health each and every day.

MORE IN THIS CATEGORY...
What No One Ever, EVER Tells You About GriefNo Kids, Just Cats: The Stigma of Being 30-Something & Childless

Mental Illness & Suicide: Healing from the Loss of a Loved One

Why Are So Many Veterans Taking Their Own Lives? 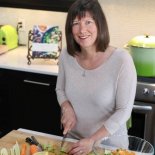