The Promise & Perils of eCigarettes

Electronic cigarettes, also known as e-Cigarettes or e-Cigs, are battery-powered vaporizers that stimulate tobacco smoking via vapor that resembles smoke.

Ever since e-Cigs have been on the market, there has been a constant debate as to whether or not e-Cigs are actually helping reduce smoking stats and if they are better for you than smoking a normal cigarette.

Some argue e-Cigarettes can help wean you off tobacco, which can cause serious health damage and even death. Others believe that permissive regulation will lead to a "re-normalization" of smoking and reverse the progress that has been made toward eliminating tobacco use in this country.

Unfortunately, according to the Food and Drug Administration (FDA), there have not been enough studies conducted on e-Cigarettes to determine the potential risk e-Cigarettes have, how much nicotine or other chemicals and toxins are being inhaled, or if there are any benefits associated with using e-Cigarettes.

If you're trying to quit smoking, how do e-Cigarettes compare to using the patch, nicotine gum and other quitting treatments?

When enlisting the help of the patch or nicotine gum, both are supposed to be used for a short period of time (roughly two or three months) to help transition you to kicking your nicotine addiction and quitting smoking altogether. However, e-Cigarettes are more of a lifestyle product, and you're less likely to want to quit using e-Cigs since it is a common belief they are safer than smoking normal cigarettes.

What else do you need to know about e-Cigarettes?

Dr. Daniel Lieberman joins Dr. Mike to discuss what e-Cigarettes are, if they are better or worse for your health, and if they have any promise for the future (or only peril).
PlayPlay PodcastdownloadDownload Podcast 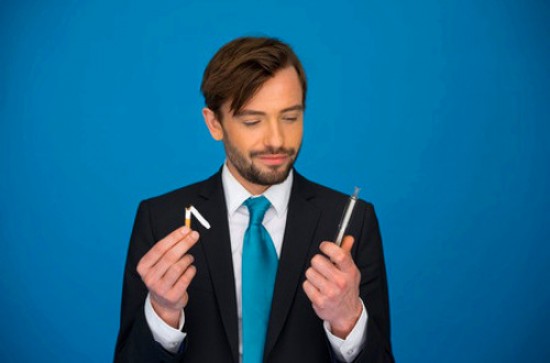 He specializes in the treatment of substance abuse and mood disorders, including depression and bipolar disorder, and is regularly listed by Washingtonian Magazine as one of the top doctors in the D.C. area. He is a Diplomate of the American Board of Psychiatry and Neurology, and a Fellow of the American Psychiatric Association.

As a nationally recognized expert in the field of mental health, Dr. Lieberman has done interviews for numerous newspapers and periodicals as well as appearing on CNN, CSPAN, ABC World News, and other news shows.

Dr. Lieberman is also interested in the psychological underpinnings of traditional fairy tales, and recently published a book of new fairy tales called Tales from the Palace of the Fairy King.
Transcription: