Taking non-steroidal anti-inflammatory drugs like ibuprofen, aspirin, Aleve, and Motrin can put you at risk for serious health issues if you use too much. As many as 100,000 people each year are hospitalized in the United States due to NSAID misuse, and an estimated 17,000 end up dying from ensuing complications. It can be easy to tear open a box of pain medicine and ignore the label if the pain is severe enough, but Dr. Byron Cryer strongly urges you to read each label carefully before using.

All NSAIDs Are Not Created Equally

A gastroenterology specialist, Dr. Cryer is a member of the Alliance for Rational Use of NSAIDs, an organization of health specialists that educates people about the safe and appropriate use of NSAIDs. Taking the time to read each medicine’s label for dosage instructions is absolutely critical, notes Dr. Cryer.

Each NSAID is different in both the amount of tablets you take and their strength. One tablet taken as a 100mg dose may not be as strong as 100mg of another. As a general rule of thumb, you should keep 1,200mg or less as your maximum dosage and stop taking them once you see improvements. The Alliance’s website cautions, “When taking NSAIDs, use the lowest effective dose for the shortest period of time.”

What if the pain is still too much to bear after taking NSAIDs? Can you take other medicine?

Acetaminophen is another type of pain reliever and fever reducer. Commonly known as Tylenol, acetaminophen has its own side effects and risks but is in a different category of pain medicine, away from NSAIDs. Because of this, you can safely alternate between the two without carrying the same risk of bleeding ulcers as taking multiple NSAIDs would have.

While both NSAIDs and acetaminophen fight pain, they do it a little differently. NSAIDs target pain and help fight inflammation. Acetaminophen, on the other hand, does not help with inflammation. So, if you have a sprained ankle and need something to reduce the swelling and pain, an NSAID would be more effective. If it’s just a minor headache or pain, Tylenol will do the trick.

If you are approaching the daily limit of NSAID dosages, you can take Tylenol as an added defense against pain. According to Dr. Cryer, there are three important things to remember when taking pain medicine of any type: read the label carefully, take only one product at a time, and if you have any questions, ask a health care professional.
PlayPlay PodcastdownloadDownload Podcast 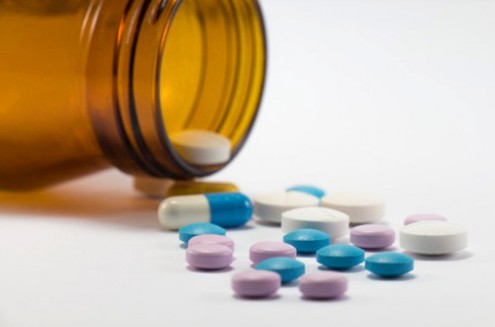 More in this show: « How to Use NSAIDs Safely Ask Dr. Mike: Can Bugleweed Cure Your Hyperthyroidism & Is Soy Bad for Your Thyroid? »