Tired of Counting Sheep? Mushrooms Might Improve Your Sleep

Whether you've had too much caffeine, are making mental lists in your head, or are stressed with your never-ending hectic schedule, losing out on sleep can cause some serious damage to your health.

According to the Centers for Disease Control and Prevention, insufficient sleep is a public health epidemic. Adults need roughly seven to eight hours of sleep every night; but more than likely, you feel lucky enough to get six.

Even though you may feel tempted to take a sleeping aid, those may also cause some scary side effects that can end up doing more harm than good.

But, just by changing your diet a little, you can drastically improve your sleep quality.

For example, did you know mushrooms might be able to help you get some shut-eye?

It's true; mushrooms are an amazing nutrient that increases oxygenation of your blood, boosts your immune systems, lowers inflammation (plus SO much more)... all factors which can contribute to the lack of sleep you're experiencing.

What specific mushroom species can assist with sleeping problems?

Listen in as Dr. Sandra Carter and Steve Farrar discuss with Dr. Mike how mushrooms might be the natural sleep aid you've been looking for to improve the quality of your much needed Z's.
PlayPlay PodcastdownloadDownload Podcast 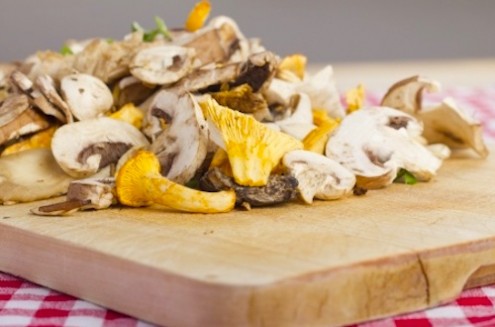 Sandra Carter, MPH, PhD, is no stranger to helping people achieve optimal health and well-being through good daily habits and nutrition. She has held roles in every department of the health industry from sponsored research director and director of corporate and community programs to hospital administrator.

While attending the Scripps Integrative Medicine Supplement Conference, Carter connected with mycologist Steve Farrar who was a mushroom extraordinaire. Since that day, she has made it her mission to educate Western cultures on the benefits of mushrooms and how to incorporate them into your diet.

Since obtaining his Masters in Horticulture from Washington State University in 1982, Steve has applied his expertise to the development of production methodologies for both fresh and mycelia mass mushrooms products.

He is sought out as a speaker and consultant for his expertise in the mycological kingdom and its application for health and the environment.
Transcription:

DR MIKE: So, not only are mushrooms good for the immune system and we just covered some of the cardiovascular benefits of mushrooms. Now we're going to move into another major problem for people today and that's sleep issues and insomnia. Mushrooms may be able to play a role there as well. I'm here with Dr. Sandra Carter. She's a PhD and also Steve Farrar who is a mycologist. The mushroom extraordinaire and they belong to a group called the Mushroom Matrix. They have a website, MushroomMatrix.com.

Before we go onto the sleep issues with mushroom, I wanted to talk about how we should be cooking mushrooms. I think, Steve, maybe you can answer this question, but is there a better way to cook mushrooms? Do I need to worry about overdoing it and losing some of the nutrients? What do you think?

STEVE: It's up to taste. You definitely want to cook the mushrooms you get from the produce end of the aisle because of the nutrient content. You don't want to overcook them, but some are definitely better browned and cooked really well. Some species take quite a bit of preparation, but generally, you want to heat them to increase the bioavailability up to a point. Boiling is generally not the best way, but in oil or baking them even, can be a good way of preparing.

DR MIKE: So, when people sauté them a lot, too. That's not going to get too hot and lose some of the nutrients when they're sautéed? I think that's probably how most people consume mushrooms, right? Is in a sauté? Is that an issue for losing nutrients?

STEVE: Not appreciably. You have to cook them somehow and that's as good a way as any and it's effective as long as you don't overdo it, it's fine. You'll preserve of them. Some of them vitamins might be broken down a little bit, some of the enzymes, but it's good. The medicinal qualities, the beta-glucans and antioxidants are generally very heat stable.

DR MIKE: Alright. So, it's not really much of an issue which is good because with some foods, I think when we overdo it, we lose some of the nutrients, but with mushrooms, we're good to go.

Let's go into the sleep problems. As a medical doctor, I've got to tell you that one of the most common complaints that I hear is insomnia, sleep issues. Maybe not even insomnia, just not restful sleep. I know that you guys are proponents of certain mushrooms species that can help with this. So, how big of a part does or can mushrooms play with people with sleep issues?
STEVE: Well, I'll touch upon it real quick and then turn it over to Dr. Carter. Again, it's kind of a multifactorial way the mushrooms could potentially help. Their adaptogenic properties help to reduce and help you better manage stress. They tend to help with digestion quite a bit. Digestive issues can really interfere with sleep both by virtue of their prebiotic beneficially effect on the probiotic organisms. There are enzymes in the mushrooms that can help with digestion. They can help modulate inflammation that can sometimes interfere with digestion. Also, just going back to the cardiovascular effects, if you're feeling better and you've got better blood flow and better energy levels, you're going to exercise more and then if you're better exercised, generally you sleep better as well. You have any thoughts, Sandra?

DR CARTER: Yes. I'll just add to that. The cordyceps mushroom which is native to Tibet, actually helps increase oxygenation of your blood and gives you an ability to exercise and have more vitality. There's a lot of research related seniors and vitality and, of course, we know that if people are exercising more, they do sleep better. There's a very strong connection there. I think that, of course, we see as Americans are more and more stuck on their computers and their phones and moving less and less, I think that has very close relationship to our inability to have very restful sleep as you were mentioning, Dr. Mike.

DR MIKE: Right. Tell us about the cordyceps and what exactly those are. By the way, you know I'm the senior scientist for the Life Extension Foundation and we use cordyceps in some energy formulas, but they're kind of a unique little species. Why don't you tell us a little bit about cordyceps and what they are.
STEVE: Yes, it's fascinating mushroom. A bit of a yuck factor in the wild.

STEVE: In nature, it's parasitic on the larvae of a moth that lives at very high level elevations in the Himalayas. We are able to now cultivate it in the laboratory and it's much more affordable and consistent as a laboratory cultured organism. We grow it on oats rather than the insects, so that part of it's gone, but it's a very remarkable mushroom. It increases ATP synthesis in the cellular mitochondrial apparatus. It's known to open up airways. It's very good for respiratory conditions, helps oxygenate the blood, increases the hemoglobin content of the red blood cells and the number of red blood cells. It's really a remarkable mushroom that a lot of sports people are using.

DR CARTER: I'll just add to that also that I think a lot of sleep issues are related to caffeine intakes, specifically, synthetic caffeine. As you mentioned, cordyceps is wonderful as a natural energy product because it's your own ability to produce energy through oxygen delivery and you're aerobic system. So, it gives you good, natural energy and then you don't have that crash factor that you have with high sugar, refined sugar and loads of caffeine.

DR MIKE: Are there any mushroom species specifically that you find more helpful for sleep?
STEVE: Well, in traditional Chinese medicine where we have the longest database of their effective use, the reishi mushroom is used a lot for sleep conditions. It tends to help calm the central nervous system. Another mushroom that's used a lot in sleep disorders in traditional Chinese medicine is Lion's Mane mushroom. It also has some function as a nerve tonic to help with neural health, protects the function of the myelin. In moderate doses, it's definitely functions as a sleep aid. We found in higher does, it actually really augments the dream states. You really get vivid dreams if you take larger doses of the Lion's Mane, but in moderate doses, both the reishi and the Lion's Mane have been used a lot. All of the mushrooms have an adaptogenic stress sort of balance effect. Strictly, those mushrooms get the most attention.

DR MIKE: If I'm going to do mushrooms to help me sleep, is this something that I do right before bedtime, a couple of hours before bedtime? Is there a best time to take them?

STEVE: I like splitting up the doses when I take the mushroom powders. I take some in the morning, some in the night. I wouldn't take it too late in the night. I would take it at dinner time, basically, or slightly before dinner time on a partially empty stomach or nearly empty stomach. Too late in the evening might, you don't want to sleep with it necessarily. Basically, just sort of putting the powder in with your dinner is a convenient way of doing it because, most of these mushrooms are best used as basically as tonics taken on a daily basis. So, if you're having to prepare and find and preserve and cook the fresh mushrooms, a lot of times, you don't have the time, but in this powdered form, it's very convenient to just make it a part of your daily regimen.

DR MIKE: So, if I use the powder in the cooking, can it be used almost like a thickener for sauces? That kind of stuff?

DR CARTER: Yes. Actually, it's excellent in sauces. It acts a bit of a thickening agent. It's also excellent in salad dressings. It makes them appear to be a little more creamy and it's a wonderful way of getting mushrooms to your whole family. So, if you find someone who was a little resistant to try some unique mushrooms or take some capsules, having a powder in with a dish that your family is already eating or a soup or a stew, as I mentioned, is a really great way.

DR MIKE: Well, Dr. Carter and Steve. We're going to have to leave it there. I went to your site. MushroomMatrix.com. Great site. I see you have stuff for dogs there. I'm going to check that out. Thanks for coming on.