Risky Play for Children: Why Climbing Trees is Essential for Development

Risky play is defined as an activity that involves the risk of getting injured. Even though this may not sound appealing to parents, most doctors suggest that it actually helps stimulate growth in your child.

For example, climbing trees boosts adrenaline, connects your mind to your body and allows children to calculate their own risk of a branch breaking or falling.

What are the benefits of risky play?

Children that are involved in risky play are given the opportunity to test their boundaries, explore their own creativity, and socialize with other children around them. Even though the last thing you want is to see your child hurt, without even realizing it, you could be hovering. This might be putting a damper on your child's freedom to explore.

What are schools and communities doing to bring this healthy play to children?

Author and designer, Rusty Keeler, joins Dr. Mike to explain what risky play is and why it's important for your child's development.
PlayPlay PodcastdownloadDownload Podcast 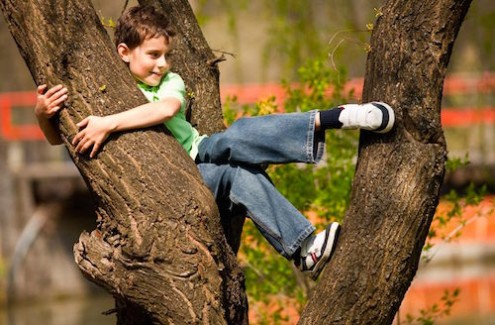 Rusty Keeler is an author, designer, and speaker who works to inspire and collaborate with communities to create beautiful outdoor environments for children.

He has designed and built natural play spaces around the world and is the author of the book, Natural Playscapes: Creating Outdoor Play Environments for the Soul (Exchange Press: 2008).

His favorite project in the world that he helped start is the "Hands-on-Nature" ANARCHY ZONE at the Ithaca Children's Garden... a place filled with loose parts and adult playworkers where kids are free to climb trees, dig in the dirt, build forts, cook over fires and more.
Transcription:

DR MIKE: The benefits of risky play for kids. My guest is Rusty Keeler. This is the second time he's been on. I wanted him to come back and talk a little bit more about this idea of risky play. He's a designer, author, speaker. He really works to inspire and collaborate with communities to create beautiful outdoor environments and I've seen some of his videos. It does look pretty cool. He has designed and built natural play spaces around the world and is author of the book, Natural Playscapes: Creating Outdoor Play Environments for the Soul.

RUSTY: Thanks, Mike. Glad to be here.

DR MIKE: So, last time we were on, I don't think we were able to spend enough time with this idea of risky play and what that really means. As a matter of fact, Rusty, I had a listener who was listening to that original time you came on and they were questioning this idea of risky play because it sounded really bad to that person—that listener.

DR MIKE: So, I pulled up a definition of risky play by a Dr. Sandseter. I don't know if you've heard of him. He wrote a book, apparently, about risky play and did a lot of research.
RUSTY: Okay.

DR MIKE: And, he does define it as "a thrilling and exciting activity that involves a risk of physical injury". Come on. That's just going to scare most parents today, right? I mean, what is this risky play business?

RUSTY: That's right. That's right. Well, you know, just right away the first thing I think of is climbing a tree and so many of our listeners would say, "Well, that's great. Kids should climb trees and they would have their own memories of climbing trees," and you're connecting with your body and you're making decisions and choices, but there's the risk that a branch could break or that you'd fall.

I conked my head one time falling a little bit out of a tree. Yet, it's something as simple as that. It's like the chance for children to climb trees and do that kind of risky play where they have some control over their environment and they're making choices. Maybe they're feeling like they're trusted by their parents but also that they actually have the opportunity to test their limits and their world.

RUSTY: Absolutely. Absolutely. So, whether you're thinking about children growing up and having vacant lots and playing and making up their own games, suddenly, there this social collaboration going on and you're having social skills being built up. But then, if it's risky play and you're playing with loose parts, a lot of times, there's construction play and there's all these problem-solving skills that are built up because it's not just a piece of fixed play equipment where everything's kind of solid and there. You can't change it.

There's kind of a new movement of playgrounds where it's loose parts and kids are working together to build their own playground or build their own forts or dens. So really, you get a chance to just kind of change your own world and problem solve and be creative. Then, you kind of get this idea of flexibility. You talk about brain development and stuff and the idea is not having something that's fixed; that every day you come to the playground and it's the same every single day, but that there's this playground that you can change or children are changing or in their back yard and it's different depending on the weather.

DR MIKE: Right. Now, Rusty, please forgive me. I don't know if you sent this to me or if I just found it doing some research, because you know, I research my guests coming on. I found a video about this type of adventurous playground. I'm not sure what you're really calling it, but it looked pretty cool. I mean, there were parts of this playground where there was gardening; there were parts where they were building forts out of tires. All of the kids were very dirty. I mean, maybe some parents wouldn't like that, but it did—it looked...I guess it wasn't really a playground, it was more of an adventure time for these kids.Is that the type of playscapes you're talking about?

RUSTY: That's exactly right. Yes. Yes. So, instead of the kind of playground equipment that you might think of at a kids' school or park, these environments are just like kind of wild landscapes that are filled with loose parts. The one that's in the video is here in Ithaca, New York, and it's a place called The Hands-On Nature Anarchy Zone. It's just a place where kids can climb trees and dig in the mud and build forts and cook over fires and what makes it work, really, is that parents who have their children come there, they want that for their children. They want their children to have the opportunity to kind of use their minds and creativity and get into things. But then, there are also these trained play workers, these adult play workers that are on site, that aren't leading the play, but they're just kind of there around the edges. Just like you said, the kids are just kind of getting into it and doing their own stuff and changing their spaces.

DR MIKE: I think, and correct me if I'm wrong. I'm going to kind of speak for you just for a moment, Rusty. You're not saying that we need to do away with organized sports or organized play. We're not saying that. There are benefits to being on a team and playing baseball and what have you.

DR MIKE: But, that's about all kids do today, right? I mean, they're either inside playing video games, or they're doing a very organized sport and they're missing out, maybe, on some of this type of adventurous play where they're not really challenging themselves physically. They're not, as some of the doctors talk about, exploring those boundaries. What's the problem with that, though? I mean, what if I just want my kid just to play organized sport? Is my kid going to miss out on something by not engaging in more free play?

RUSTY: Actually, yes. The idea of free play is really a chance for children just to have their own space to do what they want to do. Maybe, at first, if they're not used to it, if they're going to sports, if they're going to violin lessons and language lessons and stuff, they're used to just having a really tight schedule, but what children really need is a little bit of looseness in the schedule to kind of make their own decisions and then, if they have time and space and material, to start to have some of these adventurous play opportunities in there. So, they can kind of just take a breath and start to use their own imaginations and creativity.

DR MIKE: And, I think we both agree. We're not saying organized sports is...I mean, I actually played baseball. I learned a lot by doing that.

DR MIKE: But, when I was growing up, we didn't have the video games yet. I think we had PacMan. That was like the big one that you had to go to the 7-11 and play it. We didn't have it at home or anything.
RUSTY: That's right. Yes.

DR MIKE: So, we had the organized sports, but we were also doing just a lot of this type of adventure. Now, we didn't have formal playscapes, the neighborhoods were playscapes.
RUSTY: Yes.

DR MIKE: We just went in people's back yards and did this. Funny story, Rusty. I was just recently with my sister who has some kids, 9, I think, 11, 13. They have phones now, of course. Every kid has phones and the 11-year-old has like a "to-do" list on her phone and I was thinking to myself, "I don't even have "to-do" lists. I mean, should I have "to-do" lists?" Here's an 11-year-old kid...So, I think that's what we need to maybe step back a little bit from, right?
RUSTY: Yes. To have a "to-do" list that might just say "play".

DR MIKE: Play. Right. Or, at least, put that in the "to-do" list, right?
RUSTY: Right. At least get it in there. That's right. That's right.

DR MIKE: Put the phone down and go play. So, Rusty, we only have about 40 seconds left, is there a website you would like to send my listeners to?

DR MIKE: EarthPlay.net. Pretty simple. I'm sure your book, Natural Playscapes: Creating Outdoor Play Environments for the Soul is also on that website as well?

DR MIKE: Okay. When we come back, we're going to move more into talking about kids today versus kids yesterday and I want to talk about The Anarchy Zone that you've developed.