The way you used to play as a child might be different from how your child plays today.

For example, video games, apps, and other high-tech activities are extremely prevalent. Even though virtual games still stimulate the brain, kids aren't running around or exploring nature like they used to.

Playing today has become more of a sedentary activity, which, in the long run can be damaging to kids' overall health. Playground designers began noticing the declining trend in playing outdoors and decided to create a more stimulating (and fun) playground to combat it.

What are adventure playgrounds?

Having gained popularity in Europe after WWII, adventure playgrounds give children the ability to experience unstructured free play, while having their own chance to estimate risks and build things using their own imaginations.

What does the future look like for children's free play and growth opportunities?

Author and Designer, Rusty Keeler, joins Dr. Mike to discuss how you can connect your child to nature, as well as the future of adventure playgrounds in the United States.
PlayPlay PodcastdownloadDownload Podcast 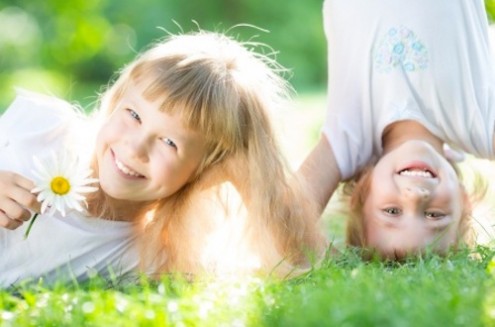 Rusty Keeler is an author, designer, and speaker who works to inspire and collaborate with communities to create beautiful outdoor environments for children.

He has designed and built natural play spaces around the world and is the author of the book, Natural Playscapes: Creating Outdoor Play Environments for the Soul (Exchange Press: 2008).

His favorite project in the world that he helped start is the "Hands-on-Nature" ANARCHY ZONE at the Ithaca Children's Garden... a place filled with loose parts and adult playworkers where kids are free to climb trees, dig in the dirt, build forts, cook over fires and more.
Transcription:

DR. MIKE: Connect kids back to nature. Maybe we're going to compare kids today versus kids yesterday and then talk a little about the differences there. I'm with Rusty Keeler. He wrote a book called Natural Playscapes: Creating Outdoor Play Environments for the Soul.

RUSTY: Thank you so much.

DR. MIKE: So, you know, you're big into developing these adventure playgrounds. You know, we describe these as places where kids can kind of stretch their boundaries a little bit, take some risky play which means, yes, you're going to climb a tree and you can fall and hurt yourself, but that's part of learning about yourself and developing physically. It's definitely different from those standard playgrounds where everything's fixed. We're talking about letting kids be more creative outside and all of that sounds really awesome.

Let me ask you this. Do you find it difficult to get kids out of the homes and get those video games out of their hands and get them out into nature into these types of playscapes?

RUSTY: You do hear stories of parents trying to do this like, "Let's go in the backyard. Let's build a fort," and the kid kind of holding their video games and looking at them like, "What? What are you talking about?" Or, "We're out here. It's so boring out here. There's nothing to do." But then, you hear stories of parents who kind of give it a little more time and maybe, you know, throw in a shovel or some loose boards or start to get some tools in there. Then, suddenly, the kids start to think, "Oh wait. There is something cool about this." Or, "Really? We can dig a hole in the back yard?" and then they start to get into it. But, sometimes it does take a real pull to get them out of that mindset of screen time.

DR MIKE: What do you think of all the games and the high tech that these kids have and are exposed to, really, at a very young age? Is that doing anything to them? Is this stuff we really should be worried about?

RUSTY: Well, you know, I mean, kids can be drawn in. That stuff is captivating and it's stimulating the mind and the brain and the video game kind of being on screen, and yet, those kids are separated from the world, they're not really using their bodies or they're not exploring. You know, it's a pretty sedentary lifestyle and kids all throughout human history were bouncing around. They were using their bodies just as much as their minds as they were growing, learning and developing.

DR MIKE: Yes, it's true. So, another true story. A friend of mine has a 16-year-old and I was over having dinner and I asked him what he did the night before. I was over there for Sunday and I was asking what he did on Saturday night and he said he hung out with his friends. His mom looked at him and goes, "What do you mean with your friends? You were in your room." He was like, "Yeah. We were playing online together. Games." That's how they define hanging out today, Rusty.

I just don't...I mean, I don't know. Maybe am I just jealous I didn't have that or do I really think that there's...I mean, it just doesn't sound right to me. I do think it's impacting them and I think we need to try to find a better balance for them.

You developed this project The Anarchy Zone? Is that right? Tell us about that.

RUSTY: Yes. That's right. That's right. So, it was this idea. It's at the Ithaca Children's Garden in Ithaca, New York, and it was this idea of having this adventure playground with loose parts where kids can do whatever they want to do. It was inspired by this adventure playground model in Europe that's been going on since starting after World War II in bomb sites where adults would see kids just playing in rubble and building materials and everything.

There was this really amazing, rich, creative play. So, they started designating places to let kids do this and then this whole play/worker field was developed. It was really rich and they're all over Europe. There were a few of these in the states, maybe a couple dozen in the 60's and 70's. They died down, but now there's this new movement where parents and teachers and communities are starting to want to bring more collaborative play, more open-ended play, back to the live children.

So, there's this new adventure playground movement. Anarchy Zone was one of the first of this kind of new movement. Instead of it being like a school playground where there's fixed structure and there's rubber surfacing, it's really just like an open field.

As a designer, I kind of call "anti-design" design. Instead of having a finished design, it was just piles of stuff. So, like, let's get a huge pile of wood chips; a huge pile of tires. Let's get dirt and there's trees to climb and then a shed just with loose parts that kids can build with and mess around with. We have families come; there's after school programs; child-care centers and it's just a place the kids just know right away that they can mess around and they can build stuff.

DR MIKE: Do you see something like that as the future playground in parks? So, are the city parks going to have an area like The Anarchy Zone? Do you think that that's where we're moving towards?

RUSTY: I do, actually. It feels like it's bridging this gap where parents want the best for their kids. They want them to play. Parents, you know you and I have these memories of being free-range kids and going around and doing what we wanted to do and parents want that for their kids, and yet, they're nervous about being outside and the different kind of fears that go along with that. This feels like it's a middle ground where kids are able to do all this wild, great stuff that we may remember doing and yet, there are these trained play workers, adults, who are onsite, not leading the play or trying to change it at all, and yet they're onsite. So, it gives parents maybe a little bit of confidence to have their kids be there.

DR MIKE: That's good. I like that. I like that because a lot of parents, they will tell you, it's just a different world today. There's more violence, more kidnapping. I mean, that kind of fear is there, so having a place that they can go where they know that there's...I mean, I think that that's important.

Let's go back to the kids through. So, I have a lot of listeners, a lot of parents that their kids are playing video games. Do you have a couple of tips that you could share with the parents to help them draw their kids out into these types of playscapes?

RUSTY: Sure. Sometimes, with video games, it's even the fun of exploring. So, the idea is like, "Well, you can explore in nature. You can explore outside." So, I think it's kind of giving some extra material, even something as simple as cardboard boxes, and saying, "Go for it. Let's make forts. Let's make a castle. Let's make stuff with this and then we can tear it apart." Or, the idea of having shovels.

You know, dig that hole in the back yard. Let's see how big we can dig it. Then, you can go further and start to have loose parts. Maybe you can have one corner of your back yard that's The Anarchy Zone, The Anarchy Corner, the Mini-Anarchy Zone and that's a place where kids can do what they want to do—mess around. Maybe it's a private space. Maybe instead of being private and tucked away in their bedrooms, they can be out with neighborhood kids in this private Anarchy Zone space and they're playing with water and mud and digging.

DR MIKE: Oh, I like that idea. I think that's a good idea, right? Of course, that means the parents have to be willing to tear up a little corner of the back yard. You know, we've gotten pretty serious about keeping perfect lawns and flowerbeds.

DR MIKE: So, maybe we've got to give up some there, too. But, I like that idea of a little corner. Back in the old days, it was the treehouse which wasn't always safe, let's be honest. We had one my dad built and, I don't know, he put it up in like 20 minutes, but it was so much fun to play on. Maybe we need to go back to that.

What are some of the best activities that are received by kids, though? You've mentioned a lot about digging holes. I mean, that would work for me. I don't know. What are some other things that kids say, "Hey, that does sound good"?

RUSTY: You know, sometimes just stocking loose parts that they can just build stuff with. Even elementary schools are starting to do this where they have storage units and they just get out everything from traffic cones and tires and fabric and rope and hoses and stuff. Then, kids start building their own contraptions, building their own stuff and just using their imagination. So, a lot of times, it's just giving kids permission to do what they kind of naturally would be inclined to do. Yes. Yes.

DR MIKE: And they're being physical and they're using their mind. They're being creative. You know, you're getting the best of everything in that type of situation.
So, the book is called Natural Playscapes: Creating Outdoor Play Environments for the Soul by Rusty Keeler. Rusty, what's the website again?

DR MIKE: Thank you so much for coming on. Keep doing what you're doing. Parents, get your kids out to nature. Get them in these playscapes.

This is Healthy Talk on RadioMD. I'm Dr. Mike. Stay well.
Tagged under
More in this show: « Risky Play for Children: Why Climbing Trees is Essential for Development Ask Dr. Mike: The New Migraine Treatment that Reduces Pain by 35% »