Texting & Typing: Long-Term Effects Technology Can Have on Your Health

It seems like you can't go anywhere without being attached to some sort of electronic device... your cell phone, a tablet, or even your computer.

With all the constant typing and texting back and forth between friends, family members and colleagues, could you be causing some serious damage to your health?

For starters, you may notice your neck, shoulders, and back hunched over as you type and read your texts, emails, Snapchats, and Tweets.

Constantly having your face in your hands can cause extra pressure around your spine, which could potentially lead to some chronic pain.

Is there a way you put an end to your hunchback and chronic neck pain?

Dr. O. Alton Barron joins Dr. Mike to discuss the hidden dangerous of texting and typing and what you can do about it.
PlayPlay PodcastdownloadDownload Podcast 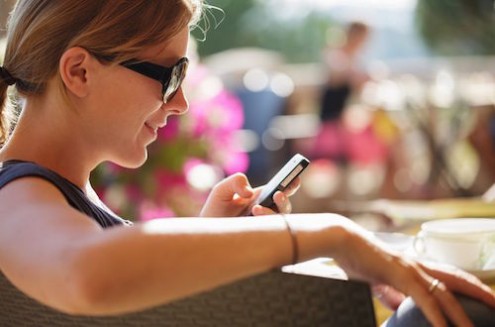 Dr. Barron is also a consultant for CBS, has written for the New York Times, and has been on top TV outlets like the CBS Morning Show and recently The Doctors.
Transcription:

As a matter of fact, I was having--I wasn't having a conversation with a friend of mine who's 16 years old. He's the son of one of my best friends. I was trying to have a conversation with him, but he was too busy texting what seemed like a book. He was doing it very effectively and efficiently, by the way.

But, are there any long-term effects from this type of repetitive activity that we all do—texting and typing?

To discuss this, I brought on Dr. Alton Barron. He's the Assistant Clinical Professor of Orthopedic Surgery at Mount Sinai School of Medicine, a Senior Attending Physician in the Department of St. Luke's Roosevelt Hospital Center and an attending hand surgeon at C.V. Starr Hand Surgery Center at Roosevelt Hospital which is the longest-running hand surgery center in the United States. Dr. Barron is also a consultant for CBS and he's written for The New York Times. He's been on the CBS Morning Show. Recently, he's been on The Doctors. Dr. Barron, welcome to Healthy Talk.

DR BARRON: Thank you very much, Mike. I really appreciate you having me on the show.

DR MIKE: They're so fast nowadays. It was very impressive to watch. Of course, he wasn't listening to me. He was too busy texting.

DR BARRON: You are hitting the tip of the iceberg. Yes. Absolutely. It's an epidemic and it's something that on so many levels is problematic. I mean, certainly, just from a purely health standpoint of not concentrating on what you're doing, whether it's texting and driving or texting and walking the streets of New York City, where I am, and where I see countless people who have tripped and fallen…

DR MIKE: All the time.

DR BARRON: So, it's a hazardous activity from that point of view. But, there also multiple long-term and short-term effects that can happen just from our obsession with these devices. We're all guilty of it. I'm not passing judgment. I do the same, but I try to restrain a little bit. That is along the lines of overuse, which you can have by overdoing this. You can actually get inflammation of the tendons and of the joints, the small joints and tendons of the hand, as well as strains of the forearm muscles. That can lead to more discreet problems such as what we call "mommy thumb" which is inflammation along the base of the thumb as well as tennis elbow and just these general tendonitis' that can be so prevalent in the wrist area. So, all this is very true. But then, it's also if we're spending so much time doing these light touching, light tapping activities, it means we're not doing the things that really keep us vigorous and strong such as just exercise in general, walking about, using our arms for various, more meaningful hand activities which are so critical to both physical well-being, as well as our cognitive well-being. That opens a whole other can of worms.

DR MIKE: Yes. That's interesting. Yes, that's an interesting side of it. Now, you mentioned something about if you're texting and typing a lot, you can get some inflammation in the tendons and stuff like this. It's not necessarily the acute inflammation, though. It's more kind of like smoldering, chronic inflammation. Is that really the issue? Because watching my friend text, there were no obvious signs of problems. It's really what may happen down the line, correct?

DR BARRON: That's right. Absolutely right. So, yes, someone who picks up a new device that they've never used before and that has a different ergonomic setup, yes. Then, they start playing a video game or some other thing that becomes obsessional and takes so much time. Yes, absolutely. You can get an acute, dramatic tendonitis, trigger finger inflammation, etc., But, you're right. Most of these are chronic attritional deconditioning problems that occur, again, because we're doing it so much that we're not keeping our hands well-developed and strong. We decondition over time because these are very, very light activities. Way lighter than…You alluded to the typewriter keyboard users.

DR BARRON: Back then, in the 50's, we didn't have all these overuse problems. Now we do because those were actually more mechanical. You really had to hit those things. I had an old typewriter. So now, it's so light that it doesn't really use any strength. So, we are deconditioning and once we get into this pattern, it's a vicious cycle downward because you have pain, you stop doing other things-- other things that would keep you fit, but you continue to do your work, obviously, or do whatever you are needing to do on a day to day basis. We're on our phones communicating as well as at our keyboards, and it's a spiraling downward. We just decondition further, the chronic pain gets worse.

DR MIKE: Let me ask you, Dr. Barron. So, everything you just said. It makes sense. I get it. It makes sense, but are we just talking about a theory that we could have problems or are you actually seeing this translate into more patients in your practice complaining about those things?

DR BARRON: Absolutely. Absolutely. I mean, we talk about it all the time. I mean, I'm an orthopedic surgeon fundamentally and I cure things surgically, but much more of my time is spent counseling people on these problems saying, "Look, you've got to start stretching. You've got to correct your ergonomics. You've got to stop huddling over your devices." That brings up the second part of what I think we're going to talk about, but absolutely. These are real problems happening now. People come in typically thinking they having carpal tunnel syndrome because it's such a catch word that's widely known. Most of these people do not have carpal tunnel syndrome. They have this overuse strain picture because remember, we manifest much of our stress—our job stress or our emotional stress---in our hands. So, if we are texting and typing feverishly to both accommodate for whatever deadlines we have and stresses that we have, whether we work at The New York Times editorial staff or whatever, then we are overusing. Then, on top of that, if we have emotional stress and psychological stress and deadlines, we are using our hands in a much different way. I think we've all experienced that in handwriting. You can see how we press harder and write more firmly and then our hand cramps up. Well, that's a quicker, simpler sign that we're doing this, but we don't get those signs as much when we're lightly texting and typing, but they still accrue and then it is a problem. It's ubiquitous. I see it all the time.

DR MIKE: So, you said something really interesting. If I were to ask people, "Where's the most common place that we hold onto stress?" I think people would say their neck, their shoulders, that kind of stuff. But, you just said hands.

DR MIKE: I don't think most people realize that.

DR BARRON: Right. Well, there are certainly the neck and shoulder. That is the other primary source. I don't know percentage wise. I see both because I'm an upper extremity physician. I treat a lot of shoulder problems as well, but no question that it manifests in the hands. I mean, one reason is that, remember, our hands are controlled by 60% of all the neurons in our symato-sensory cortex. So, the majority of the neurons in our higher cortical thinking, which is where our emotions are and where our stress can manifest, are connected to our hands. Not to our shoulders. Not to our neck.

DR MIKE: That's really interesting. I think that's something new for my listeners. So, when do you suggest that somebody goes to see their doctor about maybe a little pain they're having in their hand or something like that?

DR BARRON: Right. I mean, if it's just an occasional pain. It goes away. Say they work all day, they have a little bit at the end of the day, but by the time they have relaxed and maybe massaged them a little bit or go exercise a little bit or have a toddy or something, then it's gone. It's not there the next day when they wake up, then it's probably just a little bit of a sign, but nothing to worry about too much. But, if it's consistently there, day after day for a week or two, it's certainly better to nip that in the bud and find out what it is first, especially if there's numbness.

DR MIKE: My guest is Dr. Alton Barron and the website to go check out is CreativeCure.com This is Healthy Talk on RadioMD. I'm Dr. Mike.

Tagged under
More in this show: « Why Aren’t You Taking CoQ10? Easy Ways to Improve Your Posture »