The Genetic Pathways of Cancer

Cancer occurs when you have abnormal cells that grow out of control in your body.

Generally, the term "cancer" is used for the over 100 diseases that can occur from the abnormal cell growth in your body.

What percentage of cancers are strictly genetic? Is there anything you can do to reduce your chances? 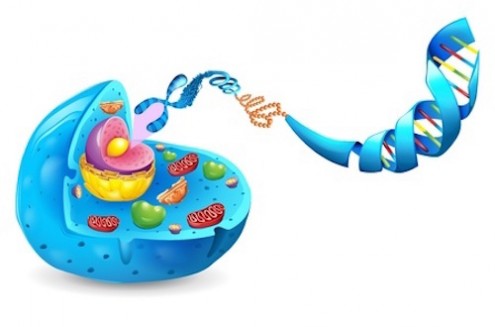 At age 48, his imminent death was considered a medical certainty. "There is nothing more we can do for you," his doctors said.

Believing that the medical interventions had only made things worse, Raymond decided it was up to him to bring himself back to health. A chemist by training and a graduate of M.I.T., he began taking large doses of vitamin C, which revived him enough to conduct extensive research and direct his own care.

It took him two years to fully restore his health. During this period he developed his revolutionary Beyond Health Model, a theory of health and disease that is so simple it can be taught to a child, yet is so powerful that many have cured themselves of terminal cancer relying on its truths.

Now 78, Raymond enjoys an extraordinary level of health. In the 28 years since his recovery, he has not taken any medications or had any surgeries, and he has not been sick except for three minor colds.

He is on a mission to reach as many people as possible with the message that you don't have to get sick, that "health is a choice." He has written five books, Never Be Sick Again, Never Be Fat Again, Never Fear Cancer Again, Never Feel Old Again and his newest book The Great American Health Hoax. Raymond has addressed health conferences all over the U.S. and in eight other countries and has made over 2,000 television and radio appearances.

He is president of Beyond Health International, a supplier of health-supporting products and advanced health education.
Transcription:

DR MIKE: What is the genetic pathway of cancer? My guest is Raymond Francis, he's an MIT-trained scientist, and has been cited as one of the few scientists who has achieved a breakthrough understanding of health and disease. He's the author of four books, and his latest book is called, or titled, Never Fear Cancer Again.

RAYMOND: Well, thank you again. Good to be here.

DR MIKE: So, now I'm going to go back to your book, okay?

"The body wants to be well. It knows how to be well, and it will be well only if we give it a chance."

But here's my question though: if I have some bad genes—a predisposition to cancer because of some genetic markers of cancer, what can I really do? I mean, I got bad genes, Raymond. What am I going to do?

RAYMOND Well, I think there's a huge misconception about genes. Genes--bad genes--do cause disease. But, it accounts for something like, I don't know, 5% of all disease is the result of bad genes. The other 95% is the result of what we tell the genes to do.

Genes are obedient servants. They do what we ask them. And if you have a gene that will predispose you cancer, and you ask that gene to give you cancer, it will obey and give you all the cancer you want it. After you have all the cancer you want, if you're unhappy about it, then stop asking, and the cancer will go away. The problem is, nobody teaches us this stuff. They don't tell us that. We were talking about toxins previously. Well, toxins can give false signals to genes, and tell the genes to do strange things. And that's part of the problem. So, we have to learn how to take care of our genes.

DR MIKE: Yes. I think this is an interesting field of study now, called nutrigenomics or epigenetics, where I think, Raymond, we're finally realizing that our genetic makeup is really more just like a blueprint. Right?

RAYMOND: Yes, it is.

DR MIKE: We can influence that blueprint in good ways and bad ways based on our environment, what we're eating, and I think that's an important point. Let me ask you though: What percent of cancers is strictly genetic?

RAYMOND: Hard to say, but definitely five percent or less.

DR MIKE: And what we mean by that is these are the rare cases where you have this gene it, expresses, it is just the way it is, and it leads down that pathway with cancer that's about five percent. Do you know what specific cancers are we talking about there?

RAYMOND: Well, any cancer. But let's look historically. You know a century ago, cancer affected only three percent of the American population. So, now it's almost fifty percent and the genes haven't changed. So, maybe that three percent was genetic, but the rest of it is what we are doing to the genes. We're damaging genes.

DR MIKE: Yes. So, Raymond, what's changed is the epigenetic component—the things that are influencing expression of those genes, correct?

RAYMOND: Absolutely, and the damage we're doing. The amount of damage were doing to the genes is unprecedented in history with our exposure to radiation, and our poor diets. Actually, our poor diets do as much damage to the genes as, as radiation. So, we're damaging the genes at unprecedented rates, and we're not supporting our DNA repair. DNA, if it gets damaged, it gets repaired. But it needs nutrients but it needs nutrients to do the repair. That's why the poor diets are causing so much damage to the genes: because we're not doing the repairs. We don't have the necessary nutrients to do the repair. And then, of course...

RAYMOND: Well, vitamin C, absolutely. Very, very important to get adequate amounts of vitamin C. But then, the B vitamins are extremely important. Vitamin B12, extremely important. So, the B vitamins, Vitamin C, these are, all critical for DNA repair. Then, things like zinc. Zinc is very critical for DNA repair. L-carnitine also. So, if we do the repairs, and when the damaged gets done every day to the genes, I mean that's just normal. But you're supposed to repair them. And we're not repairing them, so the damage stays. We're exposed to all these thousands of man-made chemicals that are giving strange instructions to the genes. And, it's no wonder we're all sick.

DR MIKE: Let me back up though, so, Ray, I want to mention something to my listeners about some of those DNA repair nutrients you just talked about. Very simple things, right? Very basic vitamins and minerals for the most part: the zinc, the B vitamins vitamin C. There's even some evidence D may play a role. Some compounds and cruciferous vegetables may play a role.

DR MIKE: But what I want people to understand because when they hear that, Raymond, they think of themselves "Oh, B vitamins? I'm fine there. I eat a pretty decent healthy diet." But what the USDA just showed a couple years ago, even when people are trying to eat healthy, we're still very deficient in some of those basic vitamins and minerals, aren't we?

RAYMOND: Right, we are. And in fact, several years back, the National Academy of Science issued a report, and they said that "Even if you eat a good diet, it is no longer possible to get all the nutrients you need," because soils have been depleted. There's a long transit time between the harvesting and the consuming of the food. So it's no longer possible. You have to supplement today. It's an absolute necessity. But then, you have to get good supplements. That's the problem. I make my own.

DR MIKE: You said something interesting. You said "Okay so we have, we have an issue with DNA repair," right?

DR MIKE: Then, we also have a lot of toxins in our environment and even in our food sources, right? I think when people think toxins, they think like bad water, bad air. But there's stuff in our foods. So you have a poor DNA, or should I should say maybe inadequate DNA repair process. On top of that, you have these manmade chemicals that are giving weird signals to the genes at the same time. What exactly do you mean by that? What, what are those manmade chemicals really doing to some of these genes that predispose us, maybe, to cancer?

RAYMOND: Well, we tell the genes what to do with the chemical environment we create in the cell. When you fill the cell with these strange chemicals, those chemicals start giving signals to the genes. They turn genes on, turn genes off. So, if you have a gene that predisposes you to cancer, and you turn it on, you've got a problem. If you've got a gene that is very protective against cancer—in other words, producing chemicals that protect you against cancer—and you turn that gene off because you're giving it a false signal because you've just consumed some dioxin or something, then you're in trouble.

DR MIKE: Yes. So, we have an issue. We need to up our DNA repair, and we talked about the B vitamins, vitamin C, and cruciferous vegetables, and but we need to do our best
to kind of get rid of those toxins and avoid some of those manmade chemicals.

RAYMOND: Avoid them as much as possible and then get rid of them, because were already overloaded with them. And for that, you need to sauna. The only way we know how to do it is to sauna on a regular basis.

DR MIKE: Interesting. And you do that on a regular basis?

RAYMOND: I sauna for an hour to an hour and a half, twice a week, regularly. And we try to measure the chemicals.

DR MIKE: Okay. Well we're going to have to leave it there. Raymond I, I really appreciate you coming on. His book is Never Fear Cancer Again. You can go check it out at the website beyondhelp.com.

This is Healthy Talk on RadioMD. I'm Dr. Mike. Stay well.
Tagged under
More in this show: « The Toxic Pathways of Cancer Ask Dr. Mike: Candida Rugosa & My Stool is White... HELP! »