Flirting with a Co-Worker: Where to Draw the Line

Download
Guest Info & Links: April Beyer
From the Show: Staying Well
Summary: What is the motive when flirting at work? Is it simply fun and playful? Or is there an ulterior motive?
Duration: 10
Host: Melanie Cole, MS

April Beyer is the Founder and President of Beyer & Company, one of the country's most successful Matchmaking firms catering to elite, relationship-ready men. A leading dating coach and relationship expert, she was also the Host of Vh1's Making Mr. Right. In her 15 years in the industry, April has been responsible for bringing together thousands of happy couples, and her advice has been featured on numerous TV and radio programs, including The Dr. Phil Show, ABC's 20/20, Good Morning America, CBS Early Show and other national and international media outlets. She's also the creator of Smart Sexy Soulful Dating, a groundbreaking three-step program that teaches women how to date, relate, flirt and communicate in a powerfully feminine and authentic way. 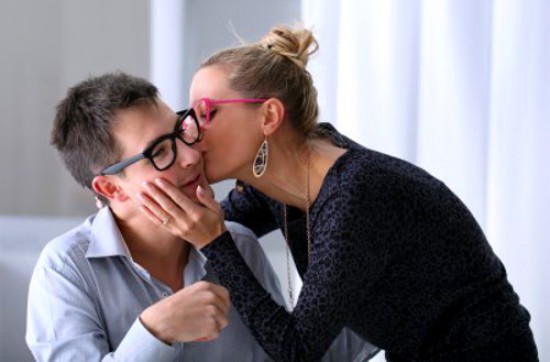 Have you heard of the term "work girlfriend/boyfriend"? This typically refers to a co-worker who flirts platonically during business hours, without any romantic intentions. Flirting to advance one's career is widely regarded as taboo. But between colleagues - without a reporting relationship - it may be more acceptable. It is certainly more common.

And it's understandable. You develop relationships and bonds with your co-workers. Professional relationships often involve mental and emotional support. You may even consider your "work boyfriend" a confidant, and be thankful that a vent session to them can help relieve a stressful day.

Enjoying innocent flirtation might even have a positive effect; it can benefit your self esteem, making you feel confident and better about yourself.

Philosophers have theorized that all communication is goal-oriented. What, then, is the motive when flirting at work? Is it simply fun and playful? Or is there an ulterior motive?

What are the boundaries you need to have in place when flirting at work and where do you draw the line?

Matchmaker and dating coach, April Beyer, shares the rules and etiquette to flirting at work.


Tagged under
More from this show . . .
Prev
Next
How to Walk Away from Unhealthy RelationshipsThe Best & Worst Protein Bars