Smart Snacking at Work: Are You a Squirrel, Gopher or Vulture?

Isabel Maples, MEd, RD, is a food and nutrition expert skilled at translating nutrition science into easy-to-understand language—and into the meals, snacks and drinks people enjoy. By focusing on what Americans can eat instead of what they shouldn’t, Maples helps make food fun again. Her nutrition advice is realistic, affordable and grounded in research. 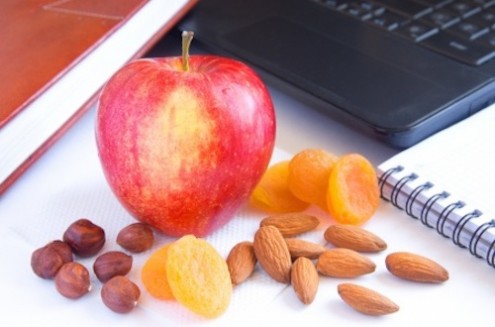 You’re at work and hunger hits. Do you:

A) head to the break room?
B) look through the snack stash in your desk drawer?
C) push F3 on the vending machine?

Listen in to learn three essential questions to ask yourself before you grab your next snack, so those snacks meet your nutrition goals.
Transcription:

Melanie Cole (Host):  You’re at work and hunger hits, what do you do? What kind of snack animal are you? My guest today is a registered dietitian/nutritionist, Isabel Maples. Welcome to the show, Isabel. Tell us about snack animals. What does that even mean?

Melanie:  The people that feed on food left over in the office, are they feeding on other people’s food?

Isabel:  [Laughs] They do sometimes. Nobody admits that. People don’t like to admit to being vultures. One out of ten will tell you that “yeah, I’m a vulture.” About one in three says that they’re a squirrel. Actually, there are advantages and disadvantages to each of the snacking styles. By knowing that, you can figure out what the pitfalls are and plan accordingly.

Isabel:  All right. A squirrel obviously does plan ahead a little bit. Some people are naturally planners and some people aren’t. If you look at what your food goals are, so maybe you’re interested in losing weight or maybe you’re interested in trying to get more vegetables in or eat more fiber, so your snack should go along with that. A squirrel, for instance, that’s interested in increasing the fiber might plan some nuts. They might have some fruits for a snack. They might have dried raisins or they might have some carrots, little baby carrots, in the snack refrigerator at work. So, it’s thinking ahead. The problem or disadvantage with a squirrel is, having all that snacks around, you might get distracted. For instance, you’ve got an open candy container on your desk. That could be really distractive, so putting that candy container farther away, or even better, hiding it so it’s not in plain view. The squirrel can plan ahead and that’s a good thing when hunger strikes. But control it by keeping it out of sight if you tend to nibble all day, if you’re a grazer, and by thinking what your goals are and plan and snack accordingly.

Melanie:  Plan those healthy snacks, so if you are a nibbler, you’re going to be able to do less damage than if it’s that big bowl of candy on your desk. Tell us about the other types.

Isabel:  Well, a gopher might go out and get food. That might be to the vending machine, it might be to the drive-thru, it might be to a corner store or something that’s in your building. Obviously, a gopher doesn’t have a plan-and-play for when snacks hit or at least it’s not right accessible. Sometimes you don’t have time to stop or the vending machine – I mean, there is a big trend towards healthier vending machines but maybe your office didn’t hear about it. When you think of it, there are really not that many good choices on the vending machine. I find that one of the best choices is just a pack of peanuts. You might also look for peanut butter cracker or granola or something like that. Some vending machines will have sandwiches and yoghurt and cereal, but most vending machines don’t. So, a gopher can still make some really good choices like, for instance, you could pop in to a fast food restaurant and you can pick up yoghurt, for instance. Probably eight out of 10 Americans don’t get enough dairy food. That’s an excellent source of potassium, calcium, vitamin D. These are three of the four nutrients that Americans are most likely to miss out on. If you got yoghurt, whether you pick it up in the fast food line or at the corner store or something in your building or whether you bring it from home, stashed in the refrigerator, that’s an easy choice. It’s easy to eat that in a meeting even or at your desk. If you do have a refrigerator at work and you’re used to hitting the vending machine, like gophers like to do, then go for a candy bar in the middle of the afternoon when you get in that slump.Another choice might be get that chocolate craze and to have chocolate milk. So, stash some chocolate milk in your refrigerator at work. Now if you are a vulture, then you don’t plan anything. There’s no plan. It’s sort of just whatever shows up in the lunchroom then it’s what you’re going to eat. That’s not always a bad thing. I mean, you can still, you know, if there’s social at work to share food, that’s a good thing. The problem is some people sort of have that role as a vulture. For instance, I used to work in an office setting where it was all female except one guy. All the females went, “Oh, Scott, come finish off this food, we wrapped it, we brought that,” and so Scott sort of had that role that he was supposed to finish off the food. Guess what? Sometimes Scott was like, “You know, I need to lose a few pounds, but I feel like I’ll hurt people’s feelings.”
A vulture can control that sense of having to eat everything that’s in there and have no control over it by planning… well, maybe not planning, but let’s say avoiding and prioritizing. What I mean by avoiding is so maybe you don’t circle around, looking for… maybe not look if they have left overs as often, so you’re not going to be going through the break room every hour and checking out what’s in there to see what the ladies eat. Avoid that area so then you don’t have to say, “Well, I didn’t really want it, but I just ate it because it was there.”
And then prioritize it. Maybe you got somebody in your office that bakes the best cheesecakes. When she has cheesecake, you want a slice of it. But maybe, you know, some of the donuts that come in almost day to day, quite often they’re not even really that good. So, you could prioritize so that you get the most satisfaction from the snack, because really isn’t that what we want? Some foods taste better than others, but we really want to enjoy the foods that do taste good and that do make us satisfied, helps fill us up and gives us that brain boost throughout the afternoon so we can get more done.

Isabel:  Well, those vending machines are refrigerated. The yoghurt or the hardboiled egg, or a turkey sandwich, yeah, those are good choices. If you get them and you find that they’re not cold, then you could question it. They probably have a number on the vending machine that you can get your money back. I would say trust those that they are going to be cold and they are okay to have.

Melanie:  What about the fast food? If you’re going to go to a fast food place, again with the gophers, if you go to a fast food place, you want to choose healthy but you walk in and the first thing you smell is French fries. How do you get rid of that all-of-a-sudden craving? We only have about a half-a-minute left, so give us really your best advice for making those healthy choices.

Isabel:  Think about it ahead of time. What are you going to give priority? What are your pitfalls? What really is your downfall? What gives you the most satisfaction and will help boost your energy and attention span so you can work through the rest of the afternoon?

Melanie:  It’s great advice on whether you’re a squirrel or a gopher or a vulture. What kind of snack animal are you? Then you can plan accordingly and make those good, healthy choices for snacks, which we all snack all the time. Decide which kind you are and make those healthy choices. You’re listening to Eat Right Radio with our great friends from the Academy of Nutrition and Dietetics. For more information, you can go to eatright.org. That’s eatright.org. This is Melanie Cole. Thanks so much for listening and stay well.
Tagged under
More from this show . . .
Prev
Next
Are Saturated Fat & Cholesterol Back in Fashion?Psychology of Breakfast: Facts & Anecdotes Behind the Most Important Meal of the Day