Ross Cascio is an Expert Level Krav Maga Instructor with over a decade teaching Krav Maga self-defense, fight, and fitness classes. Originally from Virginia, Ross moved to Los Angeles in 1998 and worked in the movie industry as a screenplay reader and story editor for almost ten years. He is 42, married and enjoys spending time with his dog. 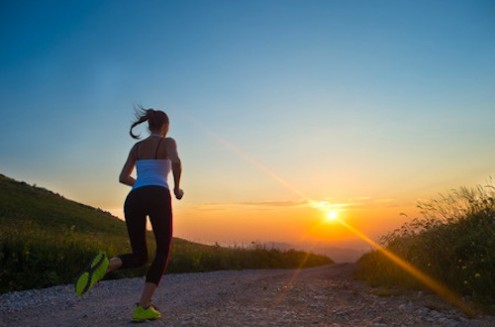 Running and walking are two of the simplest and least expensive ways to get active.

But, before you head out the door on an early morning or late night jog, it's important to take proper safety precautions.

Wearing reflective clothing in low light, staying hydrated, not listening to music too loud, and being aware of your surroundings is a good place to start.

It is also vital to know how to respond if an attacker grabs you during your workout.

What are some other tips you should know to stay safe if running and walking alone?

MELANIE: You know that running and walking are two of the most simple and least expensive ways to get active. If you listen to my shows, you know that I am always talking about running and walking and I love walking, myself. But if you head out the door – early morning like I like to do – or late night, or when we’re up at someone’s house like up in Wisconsin, you are walking up on these kind of lonely roads. There are certain safety precautions that you should probably take.

My guest today Ross Cascio, I got that right. Expert level krav maga instructor with over a decade teaching krav maga, self-defense, fight and fitness classes.

Welcome to the show, Ross. Start with the walkers. Ladies, we like to walk. We’re walking out on sometimes roads where there’s not a lot of people. I sometimes look at the trucks that drive by and think if they just pulled over, they could grab me and no one would ever even know. So, what do we do? How do we keep ourselves safe? Not that they would want to grab me. That’s what I’m saying.

ROSS: Well, Melanie, that instinct is probably one of the best things that you can have. If you are already thinking that way then you are a little bit ahead of the game. What we like to think about at krav maga when we talk to students about being safe in any situation is sort of being what we call “situationally aware”. So, the fact that you are already thinking about those kinds of things is already a step in the right direction. You are already prepared for what the dangers could possibly be in the area that you are exercising in. Someone like me--I live in Los Angeles--when my wife goes out jogging or walking, there’s different threats. It’s a more populous area, so she would have to be aware of corners you can’t see around, objects people could hide behind. Those kinds of things. The most important thing is to be, as I referred to it, situationally aware. A couple easy things you can do to help maintain a level of situational awareness is keeping your eyes up and keeping your ears open. When you go walking, Melanie, do you like listening to music or that kind of thing? Or bring your phone with you?

MELANIE: That’s an interesting question, Ross, because sometimes I’ll have the things in my ears and I’ll take one out. But that’s for me for cars and such because I can picture just being off in my own little music world and just stepping into the street. Like some texter and walker and getting hit. So, I try and keep that open ear, but I know what you mean because if somebody comes running past you, if they are a runner and they come running on your left, you’re like “Oh”. It gives you a little jump start. You know? It gives you a little shock. So, you need be ear aware and keep your eyes up. How do we do all of these things at the same time while trying to walk and not fall?

ROSS: Something else that could help you, if you had a friend or buddy to walk with so you have 4 ears and 4 eyes working, that would help. But if you are listening to music, you don’t have to listen to it so loud where you can’t hear what else is going on so someone could sneak up to the side of you or behind you; that kind of thing. If it’s walking, and certainly, again, we’re talking about on busy sidewalks and maybe even on lonely sidewalks. So often, you see people with their face down in their phone then text, text, text, whatever they are doing. If we are just keeping our eyes up every once in a while, being aware, again, of what is going on around us, there is a lot less chance of someone sneaking up on you and taking advantage of you. Being situationally aware, keeping your eyes up and keeping your ears open.

MELANIE: So, that is the best advice right there. Being aware of your surroundings. Keeping your eyes open. Keeping your ears clear. Maybe walking with a buddy, certainly. Really good. But now, what if you are an alone walker, as I am. Maybe your wife is. What should you do if somebody approaches you? Or if someone starts following you? What do you do?

ROSS: Again, it depends on the situation you are in. If you are close to a place where you can be around other people and get to some place where other people can possible help you if you feel like you’re in danger, then get there. If you’re by yourself and it is a situation where nobody else is around for a long distance or couldn’t come to help you for a great period of time, get yourself out of there. A little bit of common sense. If we’re talking about a situation where I’m being approached or now someone is definitely coming close to me to attack me that is where training with us at Krav Maga Worldwide and taking krav maga self-defense classes is really going to help.

MELANIE: Tell us a little bit about that, Ross. What does it teach you?

ROSS: Krav maga is a self-defense system, a martial art, if you will, that was developed in Israel about the time Israel was first becoming a nation. It was used to help sort of regular people – when Israel need to form an army, they needed to take regular people and teach them how to fight. That’s what our system does. We teach people how to, basically, defend themselves in a number of different situations and we bring people up to a good level of proficiency in punching, kicking, striking, avoiding – getting out of headlocks and chokes and stuff like that in a relatively short period of time. Krav maga is a self-defense system that you can apply in a short period of time to a lot of threats that are real world dangers today.

MELANIE: It’s such an interesting concept. I am kind of little. I’m 4 foot 10. I know I don’t sound like that on the radio. When I was in college, I took Tae Kwon Do; some karate classes.

MELANIE: I learned that it doesn’t matter how little you are. It’s about what you do with your littleness. What you do with that other person’s weight against you and that sort of thing. Give us just a few, little workable tips that someone little like me, or somebody else can do if somebody approaches them while they are out walking; while they are out running. Just something that they can do and I know it depends on the circumstances, but if somebody actually came up and grabbed their arm, turned them around or came up behind them. Just a couple of little tips.

ROSS: I think the key in any situation, if we’re being attacked, if I know I have to defend myself--like there is no getting out of it. I know I’m going to be in a fight, they have grabbed me and it’s on. Right? What we teach students is to be as aggressive as possible and fight until you do damage to the person that is attacking you. I can try and get away, try and get away and try and get away, but if I am not essentially damaging the person who is trying to attack me, I am not going to be able to turn the tide of that encounter. If someone grabbed me by my arm and they had both hands on my arm and I had one arm free, I would punch them in the face, I would poke them in the eyes, or I would chop them in the neck, or I would kick them in the groin. These are the type of things that we work with. If someone grabs me around the throat with both hands I am going to try to pluck their hands away from my neck, kick them in the groin at the same time or knee them in the groin at the same time. If someone grabs me from behind…

MELANIE: So, we really should do all of that? Fight as hard as we can and do all of those things? Now, we have just about a minute left. So, wrap up for us. Your best advice for going out there, krav maga. What you want the women to know, or men, that are out there walking around, how to stay safe if you’re running or walking alone.

ROSS: I think the first thing I would say, Melanie, that if you feel like a situation is kind of weird or potentially dangerous, it’s probably going to be. Trust your instincts and avoid a situation where you might actually have to fight somebody as much as possible. If it is a situation like we talked about a second ago, where it is unavoidable and I know I am in a self-defense situation, students at Krav Maga Worldwide and our philosophy at Krav Maga Worldwide is that we are going to fight as aggressively as possible until we can safely get away from that situation.

MELANIE: Absolutely. That’s great advice. Thank you so much. You’re listening to Health Radio right here on RadioMD. Share these shows with your friends because you can listen any time on demand or on the go at RadioMD.com.

This is Melanie Cole. Thanks for listening. Stay well.
Tagged under
More from this show . . .
Prev
Next
BPS: Just as Harmful as BPA?How a Baby Changes Your Sex Life