How Many Processed Foods Are You Eating? More than You Know

Dr. Jennifer Poti is a Research Assistant Professor at the University of North Carolina at Chapel Hill in the Department of Nutrition and a member of the UNC Food Research Program.

She is a nutritional epidemiologist interested in understanding the complexities of the U.S. food supply, purchasing patterns, and dietary intake. She earned her PhD in Nutritional Epidemiology from UNC Chapel Hill. Her primary research goal is to determine how more refined measures of diet can enhance our ability to identify dietary factors associated with obesity and related chronic disease.

Her research has addressed whether consumption of ready-prepared food, including both fast food and highly processed food, is associated with dietary quality and obesity. Her current projects study sources of sodium, saturated fat, and trans fat in household food and beverage purchases and evaluate changes in nutrient content of purchases and dietary intake that may occur as a result of manufacturers' efforts to reformulate packaged foods and introduce new products.

This work is particularly focused on understanding long-term food purchasing behaviors and diets within critical sub-populations, such as non-Hispanic blacks, Hispanics, and low-income individuals. 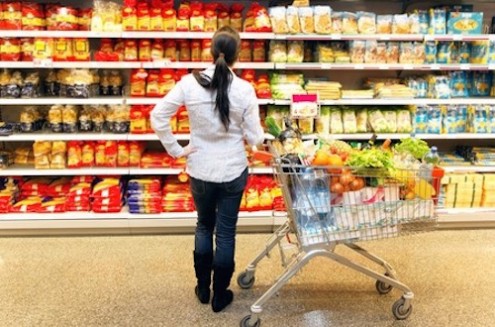 You may think that processed foods are only located in fast food chains and restaurants, but you couldn't be more wrong.

Processed foods aren't just limited to "junk food" either (like baked goods). They're located down every aisle in your grocery store, and you're probably eating more than you realize.

In fact, according to a study published in the American Journal of Clinical Nutrition, a whopping 61 percent of your calories are coming from processed foods.

Researchers analyzed data of how a typical individual buys groceries. The data came from 157,000 shoppers who tracked their edible purchases with a barcode scanner from 2000-2012 from 10 months to 14 years.

The third category was "moderately processed," which included plant or animal sources that were also injected with additives. The last category is "highly processed" and included several manufacturing mixtures that aren't recognized as an original animal or plant source.

Researchers found that more than three-quarters of calories came from highly processed (61 percent) and moderately processed (16 percent) foods. The other most notable products that were purchased were cookies, sugary sodas, juice, refined bread, and energy drinks.

What additional research is still needed?

Dr. Jennifer Poti shares more information on this startling study that shows how much processed food you could be eating on a daily basis, as well as what it means for the future of our nation's health.
Tagged under
More from this show . . .
Prev
Next
9 Truths About Eating DisordersWorkout No-Nos: Doing Too Much Too Soon