Orthorexia: What Is It & What Can You Do About It?

Marjorie Nolan Cohn is a registered dietitian nutritionist and Spokesperson for the Academy of Nutrition and Dietetics, with a specialty in eating disorders, behavior modification and is a certified personal trainer. Marjorie is co-author of Overcoming Binge Eating For Dummies. 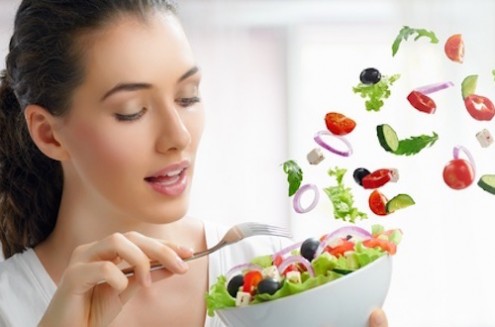 Those who have an unhealthy obsession with otherwise healthy eating may be suffering from orthorexia, which literally means “fixation on righteous eating.”

Orthorexia is a serious eating disorder.

It often starts out as an innocent attempt to eat more healthfully, but orthorexics become fixated on food quality and purity.

They become consumed with what and how much to eat, and how to deal with “slip-ups.” Self-esteem becomes wrapped up in the purity of one’s diet.

Marjorie Nolan Cohn, MS, shares more about this disease and how to know if your or someone you know struggles with an unhealthy obsession to eat healthfully.
Transcription:

Melanie Cole (Host):  Those who have an unhealthy obsession with otherwise healthy eating may be suffering from orthorexia, which literally means fixation on righteous eating. Orthorexia can be a serious eating disorder. It often starts out as an innocent attempt to eat more healthfully, as we’d all like to do, but orthorexics become fixated on food quality and purity. My guest today is Marjorie Nolan Cone. She’s a registered dietician-nutritionist and spokesman for the Academy of Nutrition and Dietetics. Welcome to the show, Marjorie. So, tell us a little bit about orthorexia. In this day and age, we all hear about so many the benefits of eating healthy. When does it cross over into that unhealthy line?

Marjorie Nolan Cone (Guest):  Hi! Thanks for having me. It’s such a great question, because that line is really just a big old gray area. I think the main things that we have to take into consideration when evaluating if someone has crossed the line from trying to be a healthier person engaged in a healthier lifestyle versus orthorexia or otherwise an eating disorder is, one, they medically compromise—have they lost too much weight, is there something else going on, is there some sort of injury because of over exercising, and/or they malnourish because now they’ve cut out so many different foods and food groups. The other thing that we have to evaluate for—and usually these happen at the same time—is are they missing out on a quality of their life that they once were able to engage in, like going out to restaurants with friends and family or otherwise socializing, but instead now they have to go the gym or they’re so obsessed with food and the quality of their food that they can’t eat anything other than if they’ve made it themselves.

Melanie:  Are we looking at this a sort of an OCD? Because the quality, the purity of the food, the intensity of reading those labels, making sure or being completely so vegan that nothing else is allowed to enter in, is that along the lines of OCD, or is it more along the lines of disordered eating, or both?

Marjorie:  It can be both. What we do see -- and I personally see with a lot of my clients is that the obsession with an eating disorder and the types of food very much does take on an OCD type quality. Now, some clients that I have are diagnosed with OCD, and that’s part of their medical history and something that needs to be dealt with in a therapeutic manner, with their therapist as well as in nutrition counseling. However, the obsession with the food, if that’s the only obsession in their life—let’s say they’re not obsessed with cleaning their house or keeping paperwork in order or other areas—then we wouldn’t diagnose that person with OCD. But the eating disorder itself does take on OCD qualities for most people, at least to some degree.

Melanie:  Now, some people think when they have somebody who is a vegan or who really likes to eat healthy, they get a lot of crap from people. “Oh don’t be so sanctimonious. You’re so holier than thou about your eating habits.” But when do you actually notice that the person, that it has crossed the line? And what you do about it? If you suggest it to that person, wouldn’t it seem like they would just right away say, “Oh, well you just are jealous at the way I eat so healthy”? It’s got a different tone to it, Marjorie.

Marjorie:  It does, because orthorexia, in terms of eating disorders, is a really convenient way to mask an eating disorder. In fact, the person who struggles with orthorexia quite often may not even realize that this has gone beyond healthy eating into a dangerous place. And so, really looking at other variables or factors in that person’s life in terms of has this gone too far may not be about the food in particular but, like I said earlier, are they missing out on social engagements. Is there that sort of righteous attitude about food, or does the person have severe anxiety or stress from eating something outside of their comfort zone? To not be able to have ice cream with your friends on a hot summer day, even though you want to eat it but because you’re worried about the quality of the food, those are just some examples of ways that you can sort of detect if this has gone too far. Because the reality is it can go unnoticed for a very long time, and it is because of the general perspective and way that Americans are eating now and putting more of a focus on health. It is deemed and looked at as sometimes a positive thing.

Melanie:  Well, it certainly is, and that’s why it’s got such an unusual quality about it. What’s the road to recovery like Marjorie? How do you get somebody -- you don’t want them start on junk but maybe move them into a little bit more animal proteins, get them to eat just a little bit of multi-grain bread or things that they’ve really completely cut out of their diet because of this fixation on perfect food?

Marjorie:  Well, as a dietician, this is definitely my area of specialty. The way I work with clients is I really take a specific list of what they are not eating any longer. What have they eated and enjoyed in the past that they aren’t allowing themselves now? And we literally do this by day. We put it in order of foods that they initially started restricting or cutting out to the most recent, and it’s basically working backward, starting from those foods that they’ve cut out the most recently and then progressing to the foods that they initially cut out. So maybe someone recently cut out, I don’t know, eggs or egg whites or organic fish, but one of the first foods they cut out is pizza. So it makes sense to me to start to add those foods that have been the most recent back in, and it really goes one at a time, slowly and doing it in a controlled environment. I often have meals and snacks with my clients and work through the emotional experience they have when they’re eating that food, and sometimes it’s really powerful and anxiety-provoking and upsetting. And sometimes it’s a lot easier than they realize. But we have to start with those initial foods first and kind of work from there.

Melanie:  Well, and that’s the hardest part about any disordered eating is, unlike alcohol addiction or of any these others, you have to eat. And so, when you’re working with somebody like this, is it similar to anorexia in that they’ve got those fears, that uncomfortable feeling from eating things they feel that they’re not supposed to? Does it lend itself to bulimia once they start getting recovered?

Marjorie:  It can. That’s a very interesting thing with eating disorders which is similar to other addictions in that it can cross lines. Someone who started out with anorexia who’s starting to try recover and working on becoming healthier might then phase to orthorexia and be eating more and be eating enough calories but have a fixation on the quality of them, and/or vice versa as well, as binge eating and bulimia. I’ve had clients who have gone through anorexia, bulimia, and binge eating over the course of their eating disorder. So it’s really nondiscriminating in that way, and it can go in many different directions.

Melanie:  In just the last 30 seconds, if you would, Marjorie, give your best advice for people suffering with orthorexia or someone they love they’re may be sensing some of those red flags.

Marjorie:  The first thing to do is call a therapist, look online, look on your insurance company, and see if you can find someone who has a background in eating disorders and get an assessment. That person should have the resources to refer you to a doctor, a dietician, a psychopharmacologist who can help build a treatment team for you to really get over this disorder.

Melanie:  Thank you so much. That’s great information. You’re listening to Eat Right Radio with our great friends from the Academy of Nutrition and Dietetics. For more information, you can go to eatright.org. That’s eatright.org. This is Melanie Cole. Thanks so much for listening.

Tagged under
More from this show . . .
Prev
Next
Psychology of Breakfast: Facts & Anecdotes Behind the Most Important Meal of the DayMaking the Most of Your Farmers' Market Experience