Why Going GMO-Free Is So Important

A natural visionary and successful entrepreneur, Andrea holds a Bachelor of Commerce from McGill University and is a Registered Holistic Nutritionist (R.H.N.).

Andrea has dedicated her life to sharing her passion for living a naturally and healthy lifestyle with the world, while helping to guide others through the confusing maze of 21st century supermarkets and fad diets.

Andrea was already a successful retail product marketing manager before she took a leap of faith in 1998 and quit her job to pursue her passion. She enrolled in a holistic nutrition program and began to understand how food affected her body while learning about the benefits of a natural and organic diet.

The following year, she gathered all of her energy and together with Randy Boyer, the two launched their dream career by founding The Healthy Shopper Inc., a coupon book for natural and organic products. Reaching more than 200,000 people a year, the Healthy Shopper, to this day, remains the only coupon book in Canada for natural and organic products.

Eight years later, lightning struck again and the pair launched www.NaturallySavvy.com, a sophisticated media company whose sole purpose is to educate the masses about living the lifestyle she truly loves.

Since then, Andrea has established herself as a respected and authoritative voice in all corners of the health and wellness industry. She has appeared as a healthy living expert on news segments across North America which have aired on NBC, ABC, CBS, Fox, Univision, WGN, CTV, and CBC. Her voice has been heard on SiriusXM as a guest on Martha Stewart and Oprah Radio, and as a regular on The Morning Jolt with Larry Flick. Her words have appeared in a variety of magazines and newspapers such as Health, Shape, Newsday, Women's Day, Men's Fitness, Chicago Tribune, Los Angeles Times, and online at the Huffington Post, the Examiner, Reader’s Digest, MariaShriver.com, Wellness.com, and The Food Network.

As the co-author of the popular book, UNJUNK YOUR JUNK FOOD, Healthy Alternatives to Conventional Snacks, Andrea believes you can have your cake and eat it too…just without the chemical additives--coined by the authors as "The Scary Seven."

Andrea is proud to be the kind of mom who feeds her kids fish oil, flaxseeds and seaweed. 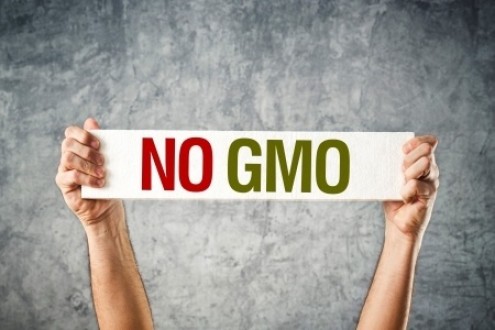 GMOs (genetically modified organisms) are living organisms whose genetic material has been artificially manipulated in a laboratory through genetic engineering. Once developed, the science moved forward in order to proliferate growth in plants and animals.

Unfortunately, this has resulted in numerous negative effects, including health problems.

Andrea Donsky, RHN, knows all too well the health concerns that can arise from eating GMOs.

Andrea had been suffering from intense stomach issues, but she could not figure out the cause. Even her doctors came to the conclusion that it was "all in her head."

Not one to give up that easily, Andrea started researching different foods and how what she was eating was affecting her body in negative ways.

Besides the gastrointestinal issues (gas, bloating, pain), Andrea often also suffered with a foggy brain and memory issues, as well as fatigue and pain.

If you're having unexplained symptoms, it's important to listen to your body; if it doesn't feel right after eating something, food is probably the culprit.

Listen in as Andrea joins host, Lisa Davis, to share her journey to going GMO-free and why it's so important for optimal health.
Tagged under
More from this show . . .
Prev
Next
Clean Eating CAN Be EasyClean Eating: Heal Yourself from the Inside Out