Sepsis: Poisoning from Within

Download
Guest Info & Links: Carl J. Flatley, DDS
From the Show: Health Radio
Summary: Sepsis can kill you in a very short span of time. How can you keep yourself and your loved ones safe?
Duration: 10
Host: Melanie Cole, MS

Dr. Carl Flatley attended college at Indiana University in Bloomington, Indiana. After graduating from the dental school program at St. Louis University in 1969 with a DDS degree, Dr. Flatley joined the U.S. Navy where his service included a voluntary tour in Vietnam, attached to the Marines, on a mobile dental team.

Returning to the practice of general dentistry in 1970 in Richmond, Indiana, he soon chose to specialize in endodontics at the Indiana Graduate Endodontic Program in Indianapolis. After completing this two-year Masters program ending in 1975, he moved to Clearwater, Florida.

For more than 20 years, Dr. Flatley headed a successful four-doctor practice, and established four other offices along the Florida West Coast that were sold off to his associates. He retired from practice in 1995 after injuring his neck, while crocodile hunting in Africa with his eight-year-old son, John. They did get a nice croc. So exciting, until he hurt himself.

A devoted family man, Dr. Flatley’s world turned upside down in 2002, when his 23-year-old daughter Erin, a perfectly healthy graduate student, entered a hospital for elective surgery. Five days later she was gone; a victim of sepsis and medical errors. It never should have happened.

Since that time, Dr. Flatley has made sepsis awareness, early detection, and effective management his personal mission and professional pursuit. He has invested nearly 13 years and over 1.2 million of personal dollars in seeding efforts that lead to and formation and the growth of the Sepsis Alliance (SA). SA is now the #1 sepsis advocacy group in the U.S. SA was a founding member of the Global Sepsis Alliance (GSA) that now represents over 70 countries and over one million healthcare givers.

Carl currently works with SA, the GSA and Viven Health of Saint Louis, trying to prevent sepsis, especially in children, because it is the #1 cause of death of children under the age of five years worldwide. In the U.S., sepsis takes more children’s lives than pediatric cancers.

His many philanthropic efforts have included the establishment of the Erin Kay Flatley Chair for Sepsis Education and Infection Control at St. Petersburg College, initiation of the Endowment for Sepsis Awareness and Education at the University of South Florida and the Internet-based, Advanced Technical Certification Program in Sepsis Awareness and Education. A knowledgeable and moving speaker, Dr. Flatley has addressed groups including the national gathering of Eli Lilly’s Acute Care Division, the Surviving Sepsis Campaign in Michigan, the Nursing Association of Georgia, and the Nursing Association of Western Washington State, and has twice made presentations to Women in Government. He also was part of the initial unveiling of the Mission Possible, a three-year program for sepsis survival at the Catholic Healthcare West Hospital System. The changes saved that hospital system over $ 31 million and 1000 lives in that initial period.

He spoke at the German Sepsis Society 2009 summer meeting in Weimer, Germany, the MATCH Conference at Ohio State University Medical Center in Sept. of 2009 and the CHEST Symposium in San Diego, Nov. 2009.  He was in Brussels in 2010 to help kick off World Sepsis Day announcement

He continues to give many talks to civic , hospital and nursing groups. He was the keynote speaker in Cedar Rapids Iowa for 25th gathering of their ACCN Chapter among others. In 2013 and 2015, he spoke at the Summit meeting in Chicago of the French company, bioMe’rieux. He also spoke at the ground breaking of the expanding bioMe’rieux headquarters in Durham, NC, in 2014.

In 2014, Dr. Flatley attended a meeting at the CDC about national sepsis policies. He is currently part of a joint effort with SA and the CDC on a National Sepsis Initiative. He has gone to the U.S. Capitol several times in 2014 to lobby lawmakers concerning a national sepsis policy. He is planning on attending the World Health Organization in Geneva in 2016 to get a resolution highlighting sepsis.

The “vitalswatch” sepsis app for lay people was also created in 2014. It works on the Android and Apple platform for phones and tablets.

In 2015 he joined a task force of the Global Sepsis Alliance to lobby the World Health Assembly to get the recognition of a World Sepsis Day.

He traveled to Seoul, South Korea in 2015 to present the Global Sepsis Awards to winning individuals, institutions and countries that have shown outstanding effort in fighting sepsis. These annual awards are sponsored by his daughter Erin's Memorial Foundation (EKFMF). EKFMF & CJF have also established four new annual monetary awards for outstanding nurses nationwide fighting sepsis and saving lives. These awards, like the GSA International awards are funded from the proceeds from a Fishing Tournament (bugsclassic.com) run by Jennifer and John Flatley to support and honor Erin's Legacy to help children.

Carl Flatley is self-funded and accepts no salary or reimbursements for his charitable works. 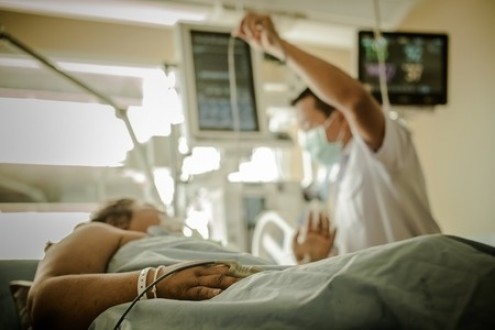 Sepsis was in the news recently with the passing of actress Patty Duke.

Jim Henson also died from sepsis in 1990. Those two are just the celebrity victims of this fast-acting killer.

Sepsis is a potentially life-threatening complication from infection. Chemicals released into the bloodstream to combat infection can trigger inflammatory responses that can damage organs. It is a ticking time bomb that can be fatal if not caught and treated immediately.

Sepsis is always caused by an infection. It can be from a fungal, bacterial or viral infection, with bacterial infections being the most common cause.

Watch for a combination of these warning signs of sepsis:

If you see a combination of these warning signs, head to the emergency room right away and state that you have some symptoms of sepsis.

Sepsis Alliance founder, Dr. Carl J. Flatley, shares how to prevent sepsis, as well as key warning signs.
Tagged under
More from this show . . .
Prev
Next
Sleeping Your Way to SuccessCancer Support: What Your Diagnosed Friend Needs