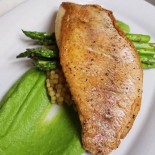 Pat fillets dry with a paper towel. Season on both sides with salt and pepper.

Heat a heavy 10-inch nonstick or cast-iron skillet over high heat. When the pan is hot, add the oil. Place the fillets in the pan, skin side down, laying them down away from your body. Press down gently with a spatula for about 20 seconds to prevent curling.

Lower heat to medium and let sizzle until fish is golden and caramelized around edges, about 2 to 3 minutes. Carefully flip fillets and add butter and thyme to pan. Tilt pan slightly to let the melted butter pool at one end. Use a spoon to baste the fish with the pooled butter. Continue basting until golden all over and cooked through, 45 to 90 seconds more, depending on the thickness of your fish. Serve immediately with chopped parsley.

Bring parsnips, garlic, cream, milk, and butter to a boil in a medium saucepan. Reduce heat, cover, and simmer until parsnips are very soft, 10–15 minutes. Uncover, add spinach and cook until liquid is reduced by half, about 5 minutes; season with salt. Purée in a blender until smooth.
Tagged under