Food was always what she turned to for comfort and she turned to it a lot. By the time she was 13, she was heading straight for obesity. Then disaster struck. Elizabeth was diagnosed with severe idiopathic scoliosis with an 80° curve to her spine. She needed surgery and was bumped to the head of the line in fear that her lungs might soon become crushed by her rib cage. She received a full spinal fusion complete with 18″ steel rods which were fused to her spine with bone chips taken from her right hip. Awesome.

That’s when the weight really started to climb. Not being able to walk properly for six weeks plus being exempt from gym class for the remainder of her school life did not help. It took being 18, graduated, on her own and realizing that she was 5’4″ and 185 lbs to really wake Elizabeth up. She didn’t want to be fat any more.

And, so it started... a lifelong love of fitness and health was sparked.

Having a background in the restaurant industry and having grown up with parents who grew, hunted or fished a large portion of their food, Elizabeth has a huge respect for local food. She now raises her own chickens for meat and eggs, grows almost half her produce (in the summer months) in her huge backyard garden and buys the rest from local farmers.

Elizabeth also now finds herself at a pinnacle of health and fitness. She's come a long way since those chest presses at the gym. She is now a FitFluential Ambassador and is training under a level-1 CrossFit trainer. She's also recently switched over to a Paleo/Primal diet. On her website (going back more then three years) you can find a little bit of everything. Vegan, vegetarian, low fat, high protein, raw and Paleo. There are also ridiculously guilt filled cakes, pies, cookies and all number of baked goodies. She has a little of something for everyone.

Questions? Comments? Feel free to e-mail her at This email address is being protected from spambots. You need JavaScript enabled to view it. .

Chef Art Smith loves the idea of bringing people together through food. It’s partly what made him the success he is today. He is the executive chef and co-owner of Table fifty-two, Art and Soul, Southern Art and Bourbon Bar, and LYFE Kitchen restaurants.

Smith has received the culinary profession's highest awards and has cooked for some of the world's most famous celebrities. In 1997, Smith became the personal, day-to-day chef to Oprah Winfrey, a position that lasted ten years. Smith now coordinates and cooks for special events all around the world.

Most recently Smith has made several television appearances including ABC’s Lady Gaga Thanksgiving Special, Top Chef and returned to Top Chef Masters (for the second time), where he quickly became an audience favorite.

Smith was also featured in an episode of Extreme Makeover: Home Edition where he lend a hand to a deserving family that has devoted their lives to providing meals for the less fortunate members of their community.

He has made regular television appearances on programs such as Iron Chef America, The Today Show, Good Morning America, Nightline, Fox News, Extra, Entertainment Tonight, BBQ Pitmasters, The Dr. Oz Show and The Oprah Winfrey Show. He has appeared on the cover of Parade magazine, and has been featured in Cooking Light magazine. He is a regular contributor to Standup magazine, whose proceeds benefit The Ben Cohen Standup Foundation, which raises awareness of the long-term, damaging effects of bullying.

Smith is the author of three award-winning cookbooks: Back to the Table; Kitchen Life: Real Food for Real Families; and Back to the Family. He contributed recipes and cooking advice to The Spectrum, the newest book by ground-breaking cardiologist and New York Times bestselling author Dr. Dean Ornish. His latest cookbook, Art Smith’s Healthy Comfort, has a focus on healthy cooking and healthy living, (published by Harper One 2013).

Smith is the founder of Common Threads, a non-profit organization teaching low-income children to cook wholesome and affordable meals since 2003. He believes that through hands-on cooking and introducing children to fresh foods we can help prevent childhood obesity, reverse the trend of poor eating habits, and learn about diversity and tolerance through the celebration of our cultural differences and our commonalities.

Smith was honored by Chicago magazine as a Chicagoan of the Year in 2007. That same year, the prestigious James Beard Foundation named him Humanitarian of the Year. In 2008 Smith received an Honorary MBA Degree, awarded by the Dedman School of Hospitality at Florida State University. Smith was inducted into the Chicago Culinary Museums Hall of Fame in 2010. September 30th 2010 was proclaimed by Richard M. Daley, Mayor of The City of Chicago as Chef Art Smith Day in Chicago. May 19, 2012 Chef Art Smith received an Honorary Doctorate of Culinary Arts from Johnson and Wales University, North Miami Campus. 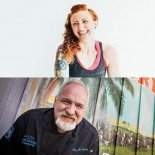 Sales of coconut oil are skyrocketing as health-conscious people everywhere are embracing the health benefits of this wonder food. Coconut oil has been shown to:

Its sister product, coconut flour, is:

Listen in as Elizabeth joins host Lisa Davis to share the amazing benefits of cooking with coconuts.

Art Smith, the award-winning personal chef to Oprah Winfrey, was over 100 pounds overweight and facing a personal health crisis that included diagnoses for diabetes, high blood pressure, and high cholesterol, Smith started to exercise and made changes to his diet while continuing to prepare scrumptious meals.

For the first time, he shares his weight-loss secrets and the recipes that helped him keep off the pounds in his book, Art Smith's Healthy Comfort: How America's Favorite Celebrity Chef Got it Together, Lost Weight, and Reclaimed His Health! Filled with stunning full-color photos and easy-to-follow directions, Art Smith’s Healthy Comfort is a culinary pleasure that will put you on the path to a new, healthy lifestyle.

Listen as Chef Art joins host Lisa Davis to share insights from his own health journey, as well as tips for cooking for better blood sugar.

Buy on Amazon
Art Smith's Healthy Comfort: How America's Favorite Celebrity Chef Got it Together, Lost Weight, and Reclaimed His Health!

More from this show . . .
Prev
Next
Meal Mindfulness: How to Heal Your Relationship with FoodShattered Image: Understanding Body Dysmorphic Disorder