Internationally recognized as leader in the “food as healing” approach to a plant-directed healthier lifestyle, Susan Irby has worked with noted schools, colleges, professionals, families and national grocery markets to share how to transform their lives through spiritual wellness, a highly plant-based diet and an active lifestyle.  Among them, Los Angeles Unified School District, Cooking Up Change, American Federation of Teachers, Women Chefs and Restaurateurs, grocers such as Whole Foods, Gelson’s and Dole Foods.  Susan has made appearances on FOX11 Good Day LA, ABC7, CBS2, KCAL9, NBC, and numerous syndicated radio shows, international conferences, national magazines, newspapers, and websites.

Susan holds a degree in Journalism from the University of Georgia, is Certified in Food Healing, and is a Certified Fitness Nutrition Specialist. She originally developed her culinary skills by working with master chefs in Italy and France. Susan is the creator of and driving force behind the successful brand, The Bikini Chef® which promotes food that heal through “figure flattering flavors.” She is the creator, producer and host of The Bikini Lifestyles® Show and Healing Remedies and Recipes.  Extensions of her brands include Bikini Cuisine®, and Bikini Cuisine Power Snax®. 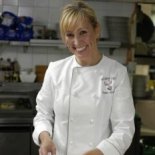 Food influences mood. The connection between gut health and brain health is strong.

Eat foods that boost dopamine levels in the body. Fava beans elevate dopamine and relieve some depression symptoms. Fresh mint is also a balm for depression.

Listen as Susan joins host Lisa Davis to discuss her top food choices to alleviate depression, advise on which foods to avoid, and reveal how she became the Bikini Chef.
Tagged under

More from this show . . .
Prev
Next
When Food Is Comfort: Overcome Emotional EatingMindful Consumption