Cannabis Grand Rounds is produced by healthcare professionals for healthcare professionals to provide accurate and unbiased education on all things cannabis. The show is hosted by Drs. Matthews, Vinocur and Altman, who are all physicians with Masters Degrees in medical cannabis science and therapeutics from the University of Maryland School of Pharmacy. The Podcast accepts no external funding or advertising.

Download
From the Show: Cannabis Grand Rounds
Summary: In this episode, we're going to delve into the history of cannabis.
Duration: 11:38 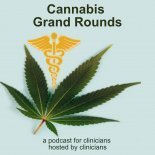 There was a lot that transpired in the early and mid-20th century that impacts regulatory issues that we still face today.In this encore episode from January 2022,  we'll cover the origins of Sativa and Indicus, William O'Shaughnessy's legacy, and standardization and precision dosing.


Be sure to also check out parts 2 & 3 of our Cannabis History series!
Tagged under

More from this show . . .
Prev
Next
Different Populations & Cannabis UseIntroduction to the Masters in Medical Cannabis Science and Therapeutics (MCST) Program