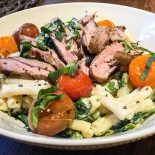 Prewarm an oven to 160 degrees.

Cut the pork fillets in half crosswise, butterfly each of the four pieces, and pound them between sheets of plastic wrap to a thickness of 1/4 inch.

Place the rosemary leaves, peppercorns, and salt in the bowl of a mini-chop or small grinder, and pulverize them. Sprinkle the pork with the seasoning mixture.

Pour the oil on a plate, and dip both sides of the paillards in the oil. Cook immediately, or stack the pieces of pork together on the plate, cover them with plastic wrap, and refrigerate them for up to 8 hours.

When you are ready to cook, heat a clean grill until very hot. Place the paillards on the grill, and cook them for about 1 1/2 minutes on each side. The meat should be undercooked at this point. Arrange the pork on an ovenproof serving platter, and place it, uncovered in the warm oven for at least 10 minutes and as long as 30 minutes, to "relax" and finish cooking in its own residual heat. Serve with the natural juices that have collected on the platter.