Eat with Intention: Healing Your Relationship with Your Own Body

Download
Guest Info & Links: Cassandra Bodzak
From the Show: Dr. Taz Show
Summary: The one relationship you'll always be in is with your own body. How can you make peace with your body and learn to love it again (and accept the love it gives you)?
Duration: 29:00

Cassandra Bodzak is a global meditation + wellness teacher. She’s an author, speaker, TV personality and works with clients one-on-one all over the world. She merges the food and spirituality conversation to help people create a life that LIGHTS them up from the inside out. She has been seen on ABC’s The Taste, SHAPE.com's healthy cooking video series and in many other wellness publications. 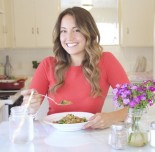 The one relationship you'll always be in is with your own body.

Unfortunately, for many individuals, women in particular, that is often a tumultuous marriage. You may feel angry at your body or disconnected from it.

How can you make peace with your body and learn to love it again (and accept the love it gives you)?

Much of that healing starts by recognizing that achieving a certain weight, shape or state of health is oftentimes not intellectual, but rather intuitive. You can't reason yourself well, or thin, or strong.

This approach is something that took Cassandra Bodzak, author of the new book, Eating with Intention, years to uncover.

In fact, her disordered thinking and behavior surrounding her body started when she was just five years old. It was the first time she had been weighed at school and could compare her weight to that of her friends. The assumption, whether conscious or sub-conscious, was that the lower the number, the better. And, even though Cassandra was much, much taller than her classmates, the fact that she was five pounds heavier than her girlfriend stimulated her mentality of "I'm fat."

In reality, she was just a tall, lanky kid whose weight was justified.

From her elementary school days, Cassandra's disordered habits escalated. She was always on the latest fad diet and worked out for hours a day. People would say, "Oh, you're such a health nut," but no one knew it came from such a dark place.

The shift, which Cassandra refers to as a version of divine intervention, began in her college days. The message of her chosen career path (acting, dancing) was "the skinnier, the better." So, Cassandra upped her efforts even more.

The result? Her body literally waged a war on itself. She developed severe pain in her abdominal area; so extreme she could barely walk at times. Blood and other lab tests led to no diagnosis.

All Cassandra wanted was to be well again. Fortunately, with the help of a caring nurse on her campus, Cassandra embarked on an elimination-type diet. Despite the "diet" portion of that tactic, it seemed to work. Upon turning vegan and gluten-free, Cassandra felt better within a week. She was a different person. Her pain stopped and her energy skyrocketed.

As she played around with different recipes to keep up with this new way of eating, she received great support from sorority sisters and friends, which helped her to continue to make positive changes.

Now, in her book, Cassandra is sharing what she learned along the way.

1) Check in with your body; it has all the answers. It's so easy to give your power away to everything outside yourself. But, your body is an incredibly smart machine. We take many systemic processes for granted, such as breathing or walking. Start to appreciate your body through practicing daily body gratitude.

2) Navigate your relationship with food with positive intention instead of adversarial intention. Elimination and detox diets often force you to get reconnected to what your body needs to thrive.

3) Recognize that being a superwoman doesn't always mean you "do it all." Sometimes it means that you take care of YOU... rest, nourish yourself, ask others to support you.

Listen in as Cassandra joins Dr. Taz to share her arduous journey, as well as ways you can start reconnecting with and healing your own body.
Tagged under

More from this show . . .
Prev
Next
How Cognitive Behavioral Therapy Can Change Your Eating Habits