Guest Bio: Zach Bush, MD
Zach Bush, MD, is one of the few triple board-certified physicians in the country, with expertise in Internal Medicine, Endocrinology and Metabolism, and Hospice/Palliative care. The breakthrough science that Dr. Bush and his colleagues have delivered offer profound new insights into human health and longevity.

In 2012 he discovered a family of carbon-based redox molecules made by bacteria. He and his team subsequently demonstrated that this cellular communication network functions to compensate for glyphosate, and many other dietary, chemical, and pharmaceutical toxins that disrupt our body's natural defense systems. This science has resulted in a revolutionary class of dietary supplements, including the product, RESTORE.

Dr. Bush points to his kids as the driving force behind his passion for change. He is fiercely motivated by a desire to have them experience a much brighter and healthier future. His education efforts provide a grassroots foundation from which we can launch change in our legislative decisions, ultimately up-shifting consumer behavior to bring about radical change in the mega industries of big farming, big pharma, and Western Medicine at large. 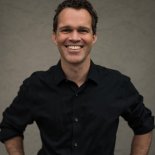 Zach Bush, MD, has a robust history in medicine and research.

His focus over the past decade has been in nutrition and he and his team have been studying glyphosate and many other dietary, chemical, and pharmaceutical toxins that disrupt our body's natural defense systems. He has also dedicated research to the negative effects of depleted soils, which also impact human health via the plants we eat--even if they have been deemed "healthy."

Dr. Bush joins Dr. Taz to explain the evolution of these toxins, starting with the invention of the plow, moving on to the use of chemicals in soil management after the Great Depression, and eventually the introduction of Monsanto's glyphosate to the farming process.

He also discusses why we need to start making changes now--and what those changes are--so the future of our humanity on Earth is preserved, as well as how his product line RESTORE is making significant differences in people's lives.
Tagged under

More from this show . . .
Prev
Next
EP 112 - Ayurveda, Happy Chefs & the Energy of FoodEP 114 - Resetting Your Metabolism After the Holidays