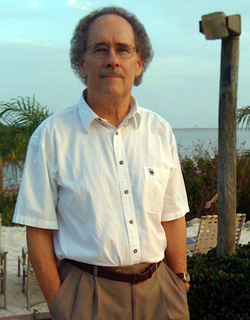 It is with a very heavy heart that I must report the terrible news that Charles passed away on Friday, October 14th. He died of a sudden heart attack.

Only two hours before, we had been on a long bike ride. Because it was a beautiful day we had planned to go to our favorite waterfront restaurant for a late lunch. He was feeling strong and in high spirits. Sadly, his heart was not as strong as his desire to live. Shortly after taking a shower, he was overcome by nausea and chest pains. He passed within thirty minutes. I was by his side.

For those of you who knew him well, you’re well aware that he was a health nut. One reason for his obsession was that he’d been born with a seriously arrhythmic heart. This condition took his father’s life when he was in his early 70”s. By exercising daily and staying on a great diet Charles managed to squeeze almost another decade out of his ailing heart.

I know that this will be a terrible shock for those of you who knew him, especially if you spoke to him recently. He had such great energy and was so knowledgeable. He shared his knowledge about natural healing with everyone he met. If you’re one of the people he was helping, I know that you will miss his wise counsel. He would want you to keep on working to improve your health.

Charles was a father, brother, husband, and friend to many. Just a few days ago he told me that he had had a wonderful life and was grateful to have achieved more than he’d ever expected. He was 80 at the time of his passing and had recently had a wonderful reunion with his family.

Since Charles did not want a funeral and since his family is scattered far and wide, there will only be a private memorial. You can be a part of this by simply taking a few minutes today to think about him and to send him your best wishes for a peaceful rest. Thank you all for being in his life............... Ingrid

In the span of 24 hours recently, Dr. Bens had 2 people close to him go through some serious health issues.

Does Your DNA Need To Be Repaired?

It's a great question about a topic that not many people know about. Genetics are changing with every generation.

Life is stressful these days! COVID-19 alone has sent us into a spiral of stress, anxiety, isolation, and more.

Pancreatic cancer incidence has steadily increased in the United States by about 1.2% annually over the last 10 years.

The Reality of Air Quality

Air quality has been in the news a lot lately, with wildfires raging through the west. But there are more issues with our air than the smoke we can see. ... read more

The Importance of Female Biochemistry

Today's topic came to Dr. Bens' attention when a young patient thought she might be having thyroid problems, believing other doctors weren't diving deep enough into the problem. ... read more

Have you heard the latest story about hot dogs? How eating one could shave 35 minutes from your lifespan?! ... read more

The Art of Symptoms Analysis

Calling something a "miracle" can get a bit touchy, but curing illness and easing pain, arent those personal miracles in their own way? ... read more

More and more cities and businesses are requiring vaccines for employees and patrons. Have you been vaccinated yet? ... read more
Page 6 of 9

Charles Bens, Ph.D. is the founder of Healthy at Work, a wellness company helping employees to become healthier following the principles of Functional Medicine. This science-based, natural approach to the prevention and reversal of chronic disease is safer, more effective and less expensive than any other health improvement program available. Charles Bens is an internationally recognized author, speaker and consultant specializing in the fields of organizational improvement and workplace wellness. His creative publications and presentations have garnered praise in the form of Man of the Year recognition in the U.S. and Canada, commendation from the President of the United States and speaking engagements worldwide, including a United Nations Habitat Conference in Istanbul. He is one of the top-rated speakers for Vistage International, the largest CEO organization in the world. Recently Dr. Bens was named the Vail Visiting Professor for the Ottawa Regional Cancer Centre. He has written nine books and over three hundred articles, many of which have been translated into other languages. He has also written and taught three university courses. His clients have included Citigroup, Sarasota Hospital, Long Island University School of Pharmacy, Florida Department of Justice, Volunteers of America, Barnes Healthcare and Fysical Therapy & Balance Centers. His workshops are typically rated 5.0 out of a possible 5.0. Here are a few participant comments.