Prevent the Spread of Infectious Disease in Sports

H. Dele Davies, MD, is an internationally recognized expert in pediatric infectious diseases and a leader in community health.

As senior vice chancellor for academic affairs and dean for graduate studies, Dr. Davies is charged with enhancing UNMC's academic focus and continuing the momentum of UNMC's strong educational enterprise. He has been leading or overseeing the development of several educational initiatives since his arrival at UNMC including the development of a campus wide interactive eLearning program, the faculty component of the iEXCEL program, the new Interdisciplinary Academy of Educators and the Digital Campus initiative.

Davies has a strong record of faculty and student mentorship, and a passion for community health. During his previous tenure at Michigan State University, he created a Children's Health Initiative to improve care for children in the community through collaborative efforts.

Among his numerous prestigious awards are the William B. Weil Jr. Endowed Distinguished Pediatric Faculty Award of the College of Human Medicine at MSU and twice being honored with the Mo-Watanabe Distinguished Faculty Award at the University of Calgary. He has been named among the Best Doctors in America for several consecutive years and has received several teaching awards.

Dr. Davies has more than 175 publications in peer-reviewed journals in addition to other scholarly works and presentations at national and international meetings.

Dr. Mary Anne Jackson completed pediatric residency at Cincinnati Children’s Hospital Medical Center and infectious diseases fellowship training at the University of Texas-Southwestern before joining the staff at Children’s Mercy, Kansas City where she has been the Division Director of Infectious Diseases since 1996. She has served in roles at the American Board of Pediatrics as medical editor of the ID subboard, the Pediatric Infectious Diseases Society and the Academy of Pediatrics as a member of the Committee on Infectious Diseases and Associate Editor of the Red Book 2015 and 2018. She has been elected to the Alpha Omega Alpha Medical Honor Society, the Society for Pediatric Research, the Academic Pediatric Association and the American Pediatric Society and in 2012, she was the received the UMKC-SOM Take Wing award.  She has been a research mentor to medical students, residents and fellows in training and junior faculty and over her 30-year career, her educational and research contributions to the field of pediatric infectious diseases have resulted in numerous teaching awards, over 300 national research presentations, and peer-reviewed publications. 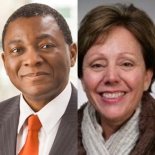 Sports activities are great for your child. They’re helpful for promoting fitness, socialization, and learning a new skill.

However, there is potential for the spread of infectious disease via shared equipment.

Speak with your child’s sports trainer. Be sure he is aware of the most common infections related to a particular sport. Examining students before participation is an inexpensive preventative measure. Ask about sanitization of equipment. The cost of improper hygiene is greater than diligence.

The pre-participation physical for sports should include a thorough history of prior infections and current lesions. Pediatricians can discuss risks for disease through sports participation. Your child’s vaccinations should be current.

Listen as Dr. Dele Davies and Dr. Mary Anne Jackson join Melanie Cole, MS, to share how to keep your child safe from infectious disease while participating in sports.
Tagged under

More from this show . . .
Prev
Next
Tattoos & Piercings: What Parents Should KnowEncore Episode: "13 Reasons Why": Talking to Your Kids About Suicide