Guest Bio: Andrew Adesman, MD
Dr. Andrew Adesman is a nationally recognized pediatrician with special expertise in the areas of parenting and child development. He is a professor of pediatrics at the Donald and Barbara Zucker School of Medicine at Hofstra/Northwell in New York and is chief of developmental and behavioral pediatrics at the Steven & Alexandra Cohen Children’s Medical Center of New York in New Hyde Park, New York. Dr. Adesman is board-certified in both Developmental & Behavioral Pediatrics and in Neurodevelopmental Disabilities. Since 2016, Dr. Adesman has consistently been named one of “America’s Top Doctors,” by Castle Connolly. 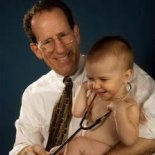 Millions of children across the United States are being raised by their grandparents.Grandparents have always played a role in children’s lives, but their involvement in raising the children has increased in the past twenty years. Their involvement can go beyond serving as a sitter or providing care while the parents are working.Grandfamilies are often formed under stress. Grandparents typically step in as primary caregivers because of a crisis. Relearning how to parent in modern times with today’s challenges means a learning curve for grandparents.Listen as Dr. Andrew Adesman joins Melanie Cole, MS, in this encore episode from January 2019 to discuss how grandfamilies are formed and resources available to families to manage the new commitment and responsibilities these grandparents have.
Tagged under

More from this show . . .
Prev
Next
When to Include Children in Meal Preparation and Encouraging Healthy EatingAdjusting Your Schedules for Back to School