She has been honored widely for her achievements, most recently being inducted into the USA National Women’s Hall of Fame for creating positive social change.

The ramifications of this work is both joyful and profound, changing forever the face of sports, health, and opportunities for women around the world and fearlessly empowering millions beyond the finish line, especially through the non-profit “261® Fearless, Inc.” 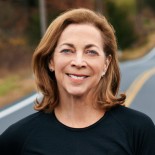 Kathrine Switzer made a name for herself 50 years ago because she wanted to run the Boston Marathon.

No woman ran that marathon prior to 1967.

Kathrine had a coach and loved to run. No political statement intended, she paid the entry fee, reviewed the rule book and received her racing bib. Nothing in the rules said a woman couldn’t run the race. Gender wasn’t listed in the rule book or on the entry form. Perhaps the general consensus among race organizers was, "why would women want to run?"

While certain male individuals tried to stop Katherine from running the race (both mentally and physically), she persevered.

Kathrine’s daring run inspired women to enter marathons. Her work contributed to women’s running becoming part of the Olympics in 1984. The number of female runners took off after that. Now, 58% of runners are women.

She founded 261 Fearless, Inc., a non-profit foundation to encourage and support female runners. It was named after Kathrine’s bib number from her first run in the Boston Marathon: the bib an official tried to tear off her.

Listen as Kathrine Switzer joins Dr. Pamela Peeke to share her story and the joys of running.

More from this show . . .
Prev
Next
Meaty Magazines: Women Want SubstanceIt Feels Great to Suck at Something!