Happy Is the New Rich

George Resch, AKA “Tank Sinatra” is a comedian, author and Instagram celebrity with close to one million loyal and engaged followers.

He is considered one of the most visible people on the Internet, with an aggregate of over 2.5 billion total impressions yearly, and due to millions of re-posts without proper credit, he is “proud” to be the most plagiarized social media personality in the world.

Truly a larger-than-life personality, Tank has been featured on ABC’s Nightline, Huffington Post, ELLE, Vogue, MTV and Inc.com. He was listed by Harper's Bazaar as one of the “Top 10 Instagram accounts to follow in 2016”.

From his start in the marketing deptartment of Island/Def Jam under Jay-Z, Tank began to craft his own brand of relatable humor and brought it to the stand-up comedy stage, where he found the repetition of jokes didn’t quite showcase his quick wit. In 2015, he almost single-handedly popularized the modern format of “memes,” the hugely popular photo caption-based content that is virally shared across all social media platforms. His first original meme was shared nearly one million times! He began his ascent to Instagram infamy when established accounts like @thefatjewish and @fuckjerry began to re-post his original work. Since then, he has cemented his path to becoming the most popular meme creator in the world.

In 2017, Tank released his first book, Happy is the New Rich, a collection of humor and insights gleaned over the course of 10 years from his experience in recovery. Tank is also working on a one-man show that will incorporate his signature sense of humor into a heartfelt story about his inspiring life journey.

Tank creates comedy with a purpose: to spread happiness, joy, and his appreciation for life to his followers and fans. He strongly believes that kindness is its own reward. He lives in Long Island, New York with his wife and son. 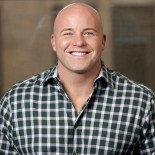 When your self esteem is low, you don’t expect more.

You don’t value yourself as much as you should. You get what you get and there’s no way to improve. Your choices follow your expectations. If you feel lowly, you expect nothing and settle for what comes your way.

It’s time to get happy, increase your self value, and live a rich life.

Listen as George Resch, also known as Tank Sinatra, joins Dr. Pamela Peeke to share how you can boost your happiness.