The Surprising World of Breasts

Florence Williams is a journalist and contributing editor to Outside magazine. Her work has appeared in the New York Times, New York Times Magazine, and National Geographic among others.

Her first book, Breasts: A Natural and Unnatural History, was a New York Times Notable Book of 2012 and the winner of the Los Angeles Times Book Prize in Science and Technology. 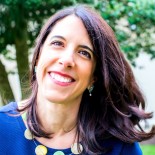 Who doesn’t want to know more about breasts?

Modern Americans tend to only consider breasts as being sexual objects. There’s a lot more to them than that. The Gracie Award-winning podcast, Breasts Unbound, explores cultural perceptions, opinions and misunderstandings about breasts.

For example, breasts were highly sexualized starting in the 1950s in the United States. During the 1940s, women fulfilled men’s jobs in factories. They started gaining confidence through the work we were doing. They started moving out of traditional gender roles.

Enlisted men and veterans then returned from World War II. It was time to put women back in their place: in the home. Hollywood starlets like Jane Mansfield and Marilyn Monroe were ideals with their soft curves. Breasts were sexualized, heightening the role of women staying at home and out of the workplace.

Listen as Florence Williams joins Dr. Pamela Peeke to share some tidbits about breasts and details on her podcast series focused on the mammaries.

More from this show . . .
Prev
Next
Encore Episode: Non-Addictive Healthy EatingEncore Episode: Resolution Revolution: Any Day is a Great Time to Change