Why It's Important for Girls to Feel Empowered

Ashley Eckstein has been widely recognized and honored as an actress, entrepreneur, fangirl trendsetter and leading voice for female fandom. Most known as the voice of Ahsoka Tano in Star Wars, Ashley also founded Her Universe in 2010 - the groundbreaking fangirl fashion company and lifestyle brand. As the Founder and GM of Her Universe Ashley continue to oversee all aspects of the company and she interacts daily with her fan base of over 350,000 fans on social media and through her website.

A leading authority on female fandom, Ashley has been featured in stories on CNN, MTV, Forbes, TODAY.com, ABC News, Entertainment Weekly, The New York Times, The Los Angeles Times, The Washington Post and The Wall Street Journal among many others. She has been chosen by Good Housekeeping magazine as one of their 25 Awesome Women and was recently chosen by CNET as one of their Women Who Inspire for 2018.

Ashley’s new book, It’s Your Universe (May 8, Disney Worldwide Publishing) is an inspirational guide for young people featuring lessons that can be learned from the iconic Disney characters and Jedi heroes as a roadmap to "Dream It and Do It!”

Ashley is an accomplished and recognized actress with numerous film and television credits to her resume. She is also an in-demand host and inspirational speaker for major studios, networks and companies such as Disney, HSN and Comic-Con International.

Married to former Major League Baseball player and World Series MVP, David Eckstein, they both enjoy traveling the world, teaching kids how to achieve their dreams and they take their love of pizza very seriously! 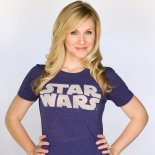 How do you make the dreams of girls come true? Through empowerment.

Fairy tales and Disney princesses share their journey to success. While it plays out in a condensed timeline, these young folks go through processes that are applicable for today’s girls.

It starts with a dream, but it requires work. Develop a plan of action to achieve those dreams. Trust in the process and continue improving skills.

Listen as Ashley Eckstein joins Dr. Pamela Peeke to share her own tale of empowerment.

More from this show . . .
Prev
Next
When You Eat CountsSecrets to Ultimate Weight Loss