Rachel McPherson is founder and president of The Good Dog Foundation, a New York-based 501(c)(3) nonprofit.

Before founding Good Dog, Ms. McPherson was an Academy Award-nominated film producer who, while working on a documentary about animal-assisted therapy, connected so deeply to the idea of easing human suffering via the human-animal bond, she stopped work on the film and started building a new organization to provide therapy dog services. She began with three therapy dogs in 1998.

Today, The Good Dog Foundation is recognized as one of the most innovative and reliable providers of animal-assisted therapy services in the United States. The organization annually fields close to 1,000 highly trained and certified volunteer dog/handler teams throughout the Major New York Metro Area. The teams donate 30,000 hours of time a year at some 300 hospitals, schools, nursing homes, libraries and other partner facilities helping people who are traumatized by disease, injury, aging, learning disorders, disabilities, disasters and other life crises.

Ms. McPherson’s prime accomplishments include pioneering development of best practices in training, placement and supervision of therapy dog teams to assure the highest level of quality and professionalism in Animal Assisted Intervention (AAI); raising and devoting substantial resources to scientific research with major academic partners to advance the evidence base for AAI; and instituting Crisis Response Training for an elite corps of volunteer teams to work with survivors and first-responders in national disasters.

Ms. McPherson is supportive of numerous health, education and cultural organizations having served on the boards of New York Methodist Hospital, the Berkeley Carroll School, and the Prospect Park Alliance. She is a current board member of the William Winter Institute for Racial Reconciliation. 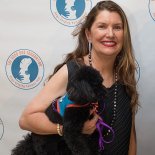 The human bond with canines is strong. Research continues to prove that a relationship with a dog is good for one’s health.

The Good Dog Foundation is focused on helping humans heal, using dogs for therapy. They train, certify and schedule their dogs for populations who have a need for healing. You and your pup can get involved by getting screened and certified for their program.

Listen as Rachel McPherson joins Dr. Pamela Peeke to discuss how the Good Dog Foundation is improving lives, and how you and your good dog can help.

More from this show . . .
Prev
Next
Let's Get CliterateWriting Your Own Wellness Prescription