Zack Friedman has inspired millions through his powerful insights, including more than fourteen million who have read his advice in Forbes. His highly-anticipated first book, The Lemonade Life, will be published by Harper Collins on August 6, 2019.

Zack is a national voice and thought leader on topics such as leadership, entrepreneurship, and investing, among other topics. He regularly interviews top CEOs and entrepreneurs on leadership, strategy, growth, and change.

Zack’s has written more than 300 columns for Forbes, and his work has appeared or been referenced in numerous publications, including Business Insider, CNBC, Yahoo Finance, MarketWatch, NBC News, U.S. News & World Report, Entrepreneur, Inc., Fast Company, Politico, MSN, New York Magazine, Mic, Black Enterprise, Essence, Christian Science Monitor, Bustle and others. He also has appeared frequently on television and radio for outlets such as CNN, MSNBC, ABC, and NPR. CNN has called him “the guy for the case.”

Before founding Make Lemonade, Zack served as CFO of an international energy company, and worked on Wall Street as a hedge fund investor. Previously, he worked at The Blackstone Group and Morgan Stanley. Zack is a former White House intern to the Chief of Staff to President Bill Clinton.

Zack received a B.A. in Political Science from Johns Hopkins, where he graduated Phi Beta Kappa, and a Master’s in Public Policy from Harvard. He received a J.D. from Columbia Law School, where he was named a Harlan Fiske Stone Scholar, and an MBA from Wharton Business School.

Zack is a term member of the Council on Foreign Relations and a member emeritus of the Dean’s Council at Harvard Kennedy School. He is a member of the Bretton Woods Committee, National Committee on U.S.-China Relations, and California Bar. Zack has served as a board director for several energy and healthcare companies. He also served as a lecturer at Columbia Law School.

Zack was named the “Revolutionary CFO of the Year” in the Middle East. USA Today named him one of the Top 20 college students in America as a member of the All-USA College Academic Team. The Asia Society named him an Asia 21 Young Leader, one of the top leaders under the age of forty who will impact global affairs in coming decades.

For keynote speaking engagements, Zack is represented by The Harry Walker Agency. 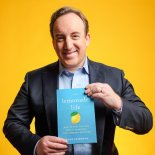 You want to live your life on your terms with purpose and possibility. You need a reason to get up every day and to watch for opportunity.

Hard work is required to get the life you want. You can choose to be bitter about the life you live or to make the best of it. Change your perspective and open up your horizons.

Listen as Zack Friedman joins Dr. Pamela Peeke to discuss how to turn the lemons of your life into lemonade.

More from this show . . .
Prev
Next
Encore Episode: Make Your Own LuckDeception in Intimate Relationships