The Science of Praying Throughout the Era of COVID-19

Her work centers on all aspects of relationships including academic research in social psychology, communication, neuroscience, and how they relate.

Elizabeth Bernstein has been a reporter for The Wall Street Journal for 20 years.  For the past decade, she has written a column she created called “Bonds: On Relationships,” about the psychology of relationships.

Ms. Bernstein started at the Wall Street Journal in 2000, as a reporter for the Weekend Journal section, where she wrote about religion and higher education and focused on national trends.  In her time at the paper, she has also launched and written a weekly philanthropy column and served as the Journal’s philanthropy reporter. From 2006 until 2009, she wrote investigative pieces on consumer health, primarily mental health issues. Her work contributed to the Pulitzer Prize that the staff of the Journal won for the paper published on Sept. 12, 2001. In 2018, she was part of the investigative team that exposed the long-time sexual harassment patterns of gambling mogul Steve Wynn.

Prior to joining the Journal in 2000, Ms. Bernstein wrote for various publications, including New York Magazine, Forbes, the Chicago Tribune, the Village Voice and Publisher’s Weekly.

In 2010, Ms. Bernstein received the Distinguished Column Writing Award of Excellence, awarded to the best column published in New York state, from the New York News Publishers Association. In 2009, she and her colleague, Nathan Koppel, received first-place awards from the New York News Publishers Association and from Mental Health America for their August 16, 2008 page-one story "A Death in the Family," about a schizophrenic man who killed his mother. In 2008, Ms. Bernstein was the winner of the American Psychoanalytic Association’s Excellence in Journalism Award, for her March 24, 2007 page-one story “After A Suicide, Privacy on Trial.” Ms. Bernstein won the 2007 beat reporting award from the Deadline Club, the New York City chapter of the Society of Professional Journalists, for her articles on college privacy issues and students’ mental health.  Additionally, in 2009, Ms. Bernstein received an award from Mental Health America for “Timely Coverage of a Mental Health Issue” for the articles on college privacy and an honorable mention from the Education Writers Association for the same series.

Ms. Bernstein received a bachelor’s degree in journalism and English from Indiana University and a master’s degree in journalism with honors from Columbia University.  In June, 2008, she completed a Knight Science Journalism Fellowship at MIT, which focused on brain science.  And in 2009-2010 she was a Rosalyn Carter Fellow in Mental Health Journalism. She currently lives with her boyfriend in Miami, where she sails, scuba dives, hangs out with her dog, Scout, and volunteers with a cool nonprofit that helps disabled veterans, called Veterans Ocean Adventures.

She says , "The key point for me is that I've written my column for the past 10 years. It covers all aspects of relationships and focuses on academic research in the fields of social psychology, communication, neuroscience and other fields related to relationships. It's called ‘Bonds.’” 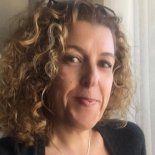 Wall Street Journal Columnist Elizabeth Bernstein joins Dr. Pam to talk about her latest column "The Science of Prayer."  Her work centers on all aspects of relationships including academic research in social psychology, communication, neuroscience, and how they relate.

In her piece, Elizabeth discusses how prayer quickens in a crisis and the practice could boost mental health.

More from this show . . .
Prev
Next
Get Inspired by the Female Chemist Who’s Blowing Up Science StereotypesThis is Your COVID-19 Survival Guide