Reinventing Your Life in the Time of COVID

Well, luckily Lesley Jane Seymour, the former editor of that magazine stepped in to fill that voice with Covey Club.

Lesley Jane Seymour is a media entrepreneur and one of the industry’s most respected leaders. From 2008-2016, she served as editor in chief of More Magazine, the leading lifestyle magazine for women over forty with a readership of 1.5 million. She was also the editor in chief and social media director of More.com, which attracted over 12 million monthly page views and 600,000 unique visitors.

In July of 2015, Lesley Jane Seymour created history by having the First Lady of the United States Michelle Obama guest edit an entire issue — leading to 8.5 billion media impressions worldwide. In 2008, Seymour led More to its first National Magazine Award nomination in the area of personal service for an investigative article called “The Endangered Uterus.”

The magazine was also nominated for General Excellence in 2009 and 2012. It won Meredith Creative Excellence Awards in 2008, 2009, 2010. The magazine won hundreds of other important journalism and SPD (art-direction) awards (see Lesley Jane Seymour’s bio on LinkedIn).

In 2012, Seymour was named executive director of Meredith’s Beauty Center of Excellence. In 2009 she was named number four on the 2009 Most Powerful Fashion Editors List by Forbes magazine.

Before taking over More, Lesley Jane Seymour served as the editor in chief for Marie Claire magazine. Under her direction, Marie Claire received a National Magazine Award nomination for General Excellence in 2006 and won several Exceptional Merit in Media Awards (2003, 2004).

Seymour spearheaded many of Marie Claire’s most recognized cause-related programs including the Time to Talk Day in Congress to raise awareness of the problem of domestic violence. She also created the One World/One Wish Campaign for the international relief organization Save the Children. Throughout her tenure, Seymour raised over $1,000,000 from readers for various charities around the world.

Seymour’s experience in the women’s lifestyle field includes serving as the editor in chief of Redbook magazine, where she repositioned the magazine and developed new editorial programs and features. She also guided Redbook to a National Magazine Award nomination for Personal Service for its comprehensive Breast Cancer Medbook, “What to Do When You Find a Lump.”

Seymour has worked with hundreds of prominent women to call attention to issues that impact women around the world. For example, she brought actress Drew Barrymore to Kenya to work with the World Food Program and shine a spotlight on the issue of rising hunger and the barriers to education for girls.

She took the entire Marie Claire team to march with actress Salma Hayek around the Washington Mall in wedding dresses to highlight the plight of domestic violence in the Latino community. She traveled to Japan and Cambodia with First Lady Michelle Obama to cover the launch of Let Girls Learn, Obama’s program to help girls around the world get a better education.

Seymour also served as editor in chief of YM, beauty director of Glamour, and copywriter and senior editor at Vogue. She is the author of two books: On the Edge, 100 Years of Vogue and I Wish My Parents Understood. Seymour has appeared on every major television show from Today, Good Morning America, MSNBC and Hardball to CNN. She is a LinkedIn Influencer, contributor to the Huffington Post, and is a micro-influencer with 60,000 (un-bought) followers on social media.

She has spoken at or served as master of ceremonies at the largest gatherings for women or media executives in the country including the 2011 Matrix Awards. In 2013 (through 2016) she was named Chair of the Editorial Advisory Board for Duke Magazine and a Global Ambassador for Vital Voices. She is a former trustee at Dana Hall School in Wellesley, Massachusetts. 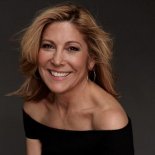 Well, luckily Lesley Jane Seymour, the former editor of that magazine stepped in to fill that voice with Covey Club - an online club for women 40+ who want to continue learning, growing, and expanding their world by making new friends and deeper connections.

Long time friends and colleagues Dr. Pam and Lesley catch up on this episode and also look at how COVID-19 is changing what community looks like.

More from this show . . .
Prev
Next
A Pandemic Problem for Older Workers: Will They Have to Retire Sooner?The Toll of Discrimination