The Toll of Discrimination

Jane Elliott is an American diversity educator. As a schoolteacher, she became known for her "Blue eyes/Brown eyes" exercise. Jane Elliott promotes the idea that there is only one race in race relations, which is namely the human race. She first conducted her famous exercise for her class on April 5, 1968, the day after Martin Luther King Jr. was assassinated. When her local newspaper published compositions that the children had written about the experience, the reactions formed the basis for her career as a public speaker against discrimination.


Elliott's classroom exercise was filmed the third time she held it with her third-graders in 1970, becoming the documentary The Eye of the Storm. This in turn inspired a retrospective that reunited the 1970 class members with their teacher fifteen years later in "A Class Divided", an episode of the PBS series Frontline. After leaving her school, Elliott became a full-time diversity educator. She still holds the exercise and gives lectures about its effects all over the U.S. as well as in several locations overseas. She has conducted the exercise with college students, as seen in the 2001 documentary The Angry Eye. 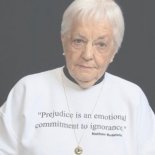 As a school teacher in the 1960's Jane Elliott became known for her exercise Brown Eyes Blue Eyes, exploring discrimination and racism in America.

The reactions formed the basis for her career as a public speaker against discrimination.

Jane joins Dr. Pam to talk about this groundbreaking study in racial prejudice, as well as the fight for equality still going on to this day.

More from this show . . .
Prev
Next
Reinventing Your Life in the Time of COVIDKeep Your Lungs Strong During The COVID-19 Pandemic