The Marine Women’s Initiative Team (WIT) which is a grassroots effort to identify barriers and advocate for policy changes to improve the recruitment, retention, and advancement of female Marines.

In 2010, First Lieutenant Sisbarro reported to Marine Corps Air Station Beaufort, SC as the Director, Public Affairs and Combat Camera Officer-in-Charge. In 2013, Captain Sisbarro graduated from the Expeditionary Warfare School, Quantico, VA, and reported to 24th Marine Expeditionary Unit as the Public Affairs Officer and Combat Camera Officer-in-Charge. As a member of the 24thMEU Command Element, she deployed as the Special-Purpose Marine Air-Ground Task Force – Crisis Response (Africa) Public Affairs Officer and then as the 24th MEU PAO to the 5th and 6th Fleet Areas of Responsibility. In 2016, Sisbarro assumed command of Company A, Headquarters and Support Battalion, Marine Corps Base Camp Lejeune, Marine Corps Installations – East. In 2017, she served as the Deputy Public Affairs Officer for MCI-East.

Sisbarro served as an instructor at the Defense Information School for one year before reporting to her current assignment at Deputy Commandant for Information, Plans, and Strategy. In summer 2020, Maj Sisbarro provided executive support to the Department of Defense Board on Diversity and Inclusion for its six-month sprint. 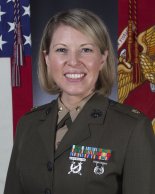 Nowadays, she is helping lead a group called the Marine Women’s Initiative Team (WIT) which is a grassroots effort to identify barriers and advocate for policy changes to improve the recruitment, retention, and advancement of female Marines.

She talks with Dr. Pam in this fascinating episode about stressors women face in the military, pregnant marines, the work WIT has done to make life better for female marines and changes that still need to be made moving forward as well as how body composition tests get in the way as women try to enter a space that was created for male bodies.

More from this show . . .
Prev
Next
High Heals: How Two Women Found Their Footing in the Medical Cannabis IndustryBreaking Bones: A Woman’s Orthopedic Surgeon’s Journey