Download
Guest Info & Links: Chef Susan Irby
From the Show: Dr. Ward Bond's Life Changing Wellness
Summary: Nagging or chronic health conditions can prevent you from living life to the fullest. What if the answer was in your kitchen?
Duration: 25:29

Susan Irby is author of nine books on wellness that include over 2,500 recipes collectively. Her six-week Food Healing Nutrition Program, in conjunction with Ward Bond, PhD, has proven success among both celebrities and non-celebrities and led to the development of her customized six-week Food Healing Kitchen Makeover program. While not a vegan herself, Susan’s food healing programs and education supports the plant-based diet approach that many of her clients adhere to.

Included in her published works are: Substitute Yourself Skinny, ranked twice by FOXNews.com in the Top 10 Best Diet Books and Amazon quinoa recipe top sellers, The Complete Idiot’s Guide Quinoa Cookbook. Susan’s work as a freelance wellness and nutrition author can be seen monthly in Max Sports and Nutrition of which Susan has been a contributor for over six years. Other freelance works have been featured in prestigious media outlets such as FIRST for Women, Self, New York Post, and numerous other media outlets both in the USA and internationally acclaimed outlets such as The Mail on Sunday and BBC Radio. She is the award-winning host of The Bikini Lifestyles® Show which was twice awarded “Best Health and Fitness Television Program” by The TASTE Awards and also aired as a weekly radio program for five years on 790 KABC Los Angeles.

Internationally recognized as leader in the “food as healing” approach to a plant-directed healthier lifestyle, Susan has worked with noted schools, colleges, professionals, families and national grocery markets to share how to transform their lives through spiritual wellness, a highly plant-based diet and an active lifestyle. 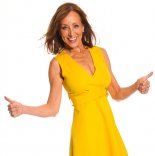 Nagging or chronic health conditions can prevent you from living life to the fullest.

What if the answer was in your kitchen?

Healing via food is an effective way to overcome health challenges and get you on the road to optimal health and wellness.

Chef Susan Irby joins host Dr. Ward Bond to discuss what food healing is, as well as some tips from their companion program, the "Food Healing Kitchen Makeover."
Tagged under

More from this show . . .
Prev
Next
EP 2 - Before the Change: Taking Charge of Your Perimenopause