Download
Guest Info & Links: Alana Stewart
From the Show: Dr. Ward Bond's Life Changing Wellness
Summary: Alana Stewart, known for her library of work in film and television, as well as a respected author, joins Dr. Bond to discuss her work with the Farrah Fawcett Foundation and how she has maintained a healthy lifestyle, inside and out.
Duration: 31:51

Alana Stewart is an actress, host, author and spokesperson. She began her career by heading to New York to become a Ford model. Soon she began her acting career appearing on such popular TV series as The Love Boat, Evil Knievel, Fantasy Island, The Bionic Woman, Hart to Hart, The Fall Guy and Masquerade.

Alana’s film roles include: Allan Carr’s Where the Boys Are, Jonathan Demme’s Swing Shift, and the mini series Small Sacrifices, Lonesome Dove, co-starred with Richard Harris in The Ravagers, the independent film Between, that debuted at the 2005 Sundance Film Festival, American Intellectuals, Dangerous Company, Mom Can I Keep Her, and Delivered in 2010. Most recently she appears in Swiped, which will be released next year.

Alana hosted the popular talk show The George and Alana Show with ex-husband, George Hamilton. Later, she appeared on the reality show I’m A Celebrity Get Me Out of Here and Celebrity Wife Swap. Her own reality show, Stewarts and Hamiltons, appeared on E! in 2015.

In 2007, Alana began working with her dear friend, Farrah Fawcett, on Farrah’s Story – a documentary on Farrah’s cancer struggle, which Alana filmed and produced. In 2009, Farrah’s Story debuted on NBC to record-breaking viewers and was nominated for an Emmy award.

Her first book was released in 2009, My Journey with Farrah, published by Harper Collins. It debuted as #9 on the New York Times bestseller list. Her second book, a memoir entitled Rearview Mirror, was released in 2012.

Alana is also the president of the Farrah Fawcett Foundation for cancer research. A portion of the proceeds from My Journey with Farrah are donated to the foundation.

She has received the prestigious Genii Award from the American Women in Radio and Television and The John Wayne Cancer Center True Grit Award. She was also recognized by The Beckstrand Foundation for her continued work in fighting cancer. 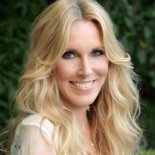 Alana also shares how she has maintained her healthy lifestyle -- both inside and out -- and as Dr. Bond puts it, "beats Father Time."

A few tips from Alana:

Unfortunately, events took a different turn and after seeking various treatments including alternative choices, she passed away on June 25, 2009.

Farrah wanted to help further cutting edge research and was particularly interested in alternative practices. She often wondered why there was not more research done with this type of cancer and hoped to be able to contribute to this less known area of the disease.

Farrah cared deeply about those less fortunate than she; those struggling with financial hardships as a result of their diagnosis.


Buy on Amazon
Rearview Mirror - A Memoir
Tagged under

More from this show . . .
Prev
Next
EP 10 - Get Out of the Drive-Thru & Into the KitchenEP 12 - Kenny Aronoff's Path to Success & Healthy Lifestyle