Kenny Aronoff is one of the world’s most influential and in-demand drummers and percussionists. Rolling Stone, in fact, cited him as one of the “100 Greatest Drummers of All Time” and Modern Drummer has named him #1 Pop/Rock Drummer and #1 Studio Drummer for five years. In 2017, he is being inducted into the Classic Drummer Hall of Fame.

With a style of playing that combines power and finesse, his unique and versatile sound has been instrumental on over 60 Grammy-nominated or awarded recordings representing over 300 million in sales, with more than 1300 that were RIAA certified Gold, Platinum or Diamond.

Author is the most recent accomplishment in his long line of credits. His autobiography, Sex, Drums, Rock ‘n’ Roll! The Hardest Hitting Man in Show Business (Backbeat Books, November 15, 2016), only two months after publication, is in its second printing. This is only a tell all in the sense that he shares his learning experiences both behind the drum set and with those he shared the stage with. This is not about sex; it is about the same passion that drives us all to be the best we can be doing what we love with those with whom we want to share our talents.

The book takes us from his early years when, like many other kids, Kenny joined his first band, The Alley Cats, in Massachusetts at age eleven after seeing the Beatles on the Ed Sullivan Show. A self-taught drummer, he played in local bands throughout junior high and high school. At 16, he decided to focus on classical music and studied and played with members of the Boston Symphony Orchestra, including world-renowned timpanist Vic Firth. He went on to study at the University of Massachusetts and at Indiana University, where, among other honors, he was awarded the school’s prestigious Performer’s Certificate. During summer breaks he played in the symphony orchestras at the Aspen Music Festival (run by The Juilliard School of Music) and the Tanglewood Music Festival (run by the Boston Symphony Orchestra).

After graduating, Kenny was offered timpani positions in several symphony orchestras, but instead studied drum set in Boston and New York. He began to concentrate on jazz and fusion music, and in 1977 he returned to Indiana and spent several years in a popular local band until 1980 when he joined the John Mellencamp band, recording 10 albums and touring with him over a 17-year period. Kenny’s innovative style and solid backbeat became the driving force behind Mellencamp’s long run of definitive hit records in the ’80s and ’90s, a list that includes American Fool, Scarecrow, Uh Huh, The Lonesome Jubilee, Whenever We Wanted, Dance Naked, Big Daddy, Human Wheels, Mr. Happy Go Lucky and others.

In the mid-80s, Kenny began an enormously successful career as a studio musician. Today he’s among the world’s most in-demand session and on-stage drummers. Kenny has his own studio in North Hollywood, CA, Uncommon Studios LA, where he records the drum tracks for artists and bands’ recordings.

Kenny’s winning approach to drumming and to life has given him the ability to sustain a successful career for over three and a half decades. He has an extraordinary gift and ability to manipulate sound using drums, cymbals and a variety of percussion instruments, the combination of which create a rare and custom accompaniment for each artist for whom he sets the pace – and raises the bar. His talent and acclaim have earned him recognition with signature gear including Vic Firth drumsticks, Meinl has Kenny Aronoff signature cowbells in two sizes, and Tama features three Kenny Aronoff Trackmaster signature snare drums bearing his name.

In addition to performing and creating amazing music, Kenny is so inspiring that he is now sought after as a motivational speaker, espousing “The 7 Keys to a Successful Life and Career.” He talks about becoming successful and sustaining that success in your chosen career and in life. Self-Discipline and Hard Work fueled by Passion and Education move you forward on the path. Persistence, Perseverance, and the Repetition of anything is the Preparation for Success. Striving to always be better has been the tool that has kept Kenny at the top of his game for over 35 years. 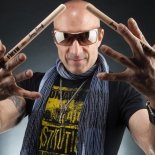 Voted by Rolling Stone magazine as one of the greatest drummers of all time, Aronoff is arguably the most sought-after recording and touring beat master ever.

None of Kenny's success would have been possible without his fierce work ethic and unique approach to drumming. Through any setbacks -- heartaches, failures, injuries, or plain fatigue from the rigors of the biz -- Aronoff has stayed the arduous and wild rock 'n' roll course. The tale he tells in his book, Sex, Drums, Rock 'n' Roll!: The Hardest Hitting Man in Show Business, describes what is possible with unrelenting dedication to one's bliss is an inspiration to all.

In addition to his work as a world-famous recording and touring drummer, Aronoff finds time to be a dedicated teacher and has shared his expertise with students all over the world, teaching clinics for Tama and Zildjian.

Kenny joins Dr. Bond to discuss his path to success in both the recording industry and life as a whole, as well as the message he spreads as a motivational speaker on “The 7 Keys to a Successful Life and Career.”
Tagged under