Philip Kenneth Collen was born in Hackney, East London, England and was influenced by everything from the Rolling Stones to the Motown sound to glam rock, hard rock, punk, or anything with flair. At the age of 14, Collen was taken by his cousin to his first rock concert, Deep Purple. “The experience changed my life,” said Phil. After months of begging, his parents finally relented and Collen got his first guitar at the age of 16.

Influenced by guitar players such as Ritchie Blackmore, Jimi Hendrix, and Mick Ronson, Collen soon developed his own unique, aggressive style of playing guitar. He quit his day job and went on tour as a guitarist with the London-based post-punk glam rock band Girl. Collen joined Def Leppard in 1982 during the Pyromania album recording sessions. Pyromania was Def Leppard’s breakthrough album and turned Def Leppard into rock super-stars almost overnight. They spent the summer of 1983 at #2 on the Billboard charts, behind Michael Jackson’s Thriller. Pyromania sold in excess of 10 times platinum and received a Diamond award in the U.S. and Canada.

The band's next album Hysteria became one of the best-selling rock albums of all time achieving 12 times platinum in the US and selling over 25 million albums worldwide. The collection spawned seven singles including the smash hits "Pour Some Sugar On Me" and "Love Bites." The band received their second Diamond album putting them in an exclusive group of only six bands ever to achieve two Diamond albums in America. Def Leppard was now among rock-n-roll’s elite which included The Beatles, Led Zeppelin, Pink Floyd, The Eagles, and Van Halen.

2015 saw the Simon and Shuster release of Adrenalized, Collen's autobiography for which he successfully garnered critical reviews.

In summer 2017, Phil Collen was invited by internationally renowned guitarist, Joe Satriani, to take part in his G4 Experience. During the day Collen taught master guitar classes while jamming in the evening with Satriani, Tommy Emmanuel, Paul Gilbert and Warren DeMartini for the G4 attendees.

In addition to his various collaborations in music, Collen recently partnered with Vancouver based shoe company, SixHundredFour, to design a line of custom hand-painted sneakers, Electric Splatter, echoing the PC1 30th Anniversary line of guitars he embellished for Jackson Guitars 30th anniversary in 2010. As with the custom guitars (which have now more than doubled in value; one recently appearing on the hit show, Pawn Stars) the limited sneakers sold out the entire run in hours of release.

Collen has been a vegetarian for 35 years, vegan for six years, and alcohol-free for 30 years. He continues to keep in top physical shape training with A&E Celebrity Sweat's Eric The Trainer. Collen has been featured in outlets ranging from Rolling Stone, PEOPLE, and New York Times to Guitar World, Inc., Iron Man and beyond. 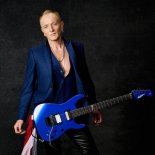 Phil Collen, well-known musician of Def Leppard, is disputing the cliche of being part of a "sex, drugs and alcohol" industry with his vegan and alcohol-free lifestyle.

Starting as a vegetarian for moral reasons 35 years ago, Collen has been a vegan for the last six years and attributes his diet and exercise regimen to his great health.

Collen joins Dr. Bond to discuss his journey to a healthy existence, including his favorite go-to foods and workouts. Collen also shares his road to success and information about his other ventures such as new rock n' soul quartet, Delta Deep.
Tagged under

More from this show . . .
Prev
Next
EP 49 - Overlooked Pain: Trivial Aches & Pains Could Lead to Serious ProblemsEP 50 - Faith & Fitness of a World Champion